Samir Nasri made his France debut at the age of 19 in 2007 and has won 41 caps, scoring five goals, but his international career has been dogged by controversy. 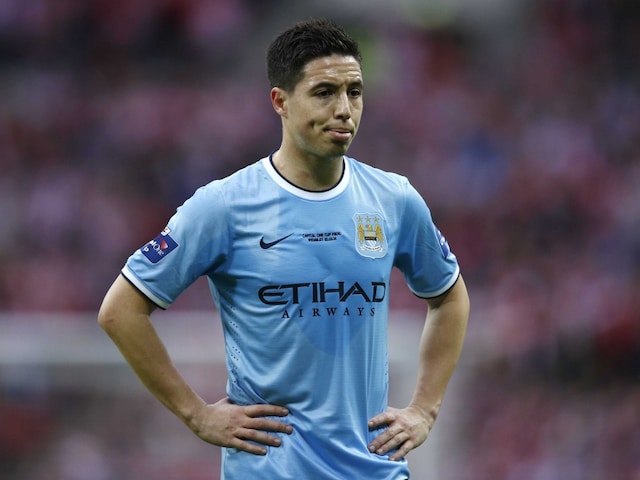 The 27-year-old dropped a strong hint last week that he had decided to cut short his chequered international career, having been omitted from the France squad that went to the World Cup by coach Didier Deschamps.

"I will only be 29 in 2016 for the European Championship, but the French national team doesn't make me happy," Nasri said in an interview with British newspaper The Guardian published on Sunday.

"Every time I go there, there is just more trouble. I face accusations about me and my family suffers from it and I don't want to make them suffer, so it's better to stop it and focus on my club career."

Nasri made his France debut at the age of 19 in 2007 and has won 41 caps, scoring five goals, but his international career has been dogged by controversy.

He clashed with senior players during the 2008 European Championship and unleashed an expletive-strewn tirade at a journalist following France's elimination at Euro 2012, for which he received a three-game ban.

He was also left out of the France squad for the 2010 World Cup.

Nasri's girlfriend Anara Atanes sparked controversy in May when she responded to his exclusion from the World Cup squad with a foul-mouthed Twitter attack on Deschamps and the France squad.

"Let's face it, as long as he is going to be the manager, I don't think I have a shot after everything that has happened," Nasri said of Deschamps.

"It's not just him. He did what he thought was best for his team. I understand his choice. It is not something about him. I don't have any problem with him. It's just everything.

"It is not him who talks in the press, it is the press who say things about me and the players as well. Before this World Cup they were saying that some players complain (about Nasri).

"Why do you want me to be in the group with some players who can't even be true in front of me and tell me that they have a problem? I don't want to be there. I am not happy. I don't want to go there any more."

Meanwhile, Nasri has claimed that the abuse he receives from fans of his former club Arsenal -- who City are due to face in the Community Shield later on Sunday -- did not bother him.

"The abuse doesn't affect me on the pitch. I just think it's stupid," Nasri told several British newspapers.

"I'm not an Arsenal fan, I am not from London. If we want to be honest, we are players who look at what is in the the best interests for us and our career.

"When Manchester City came, it was the best choice for me to come here. And today I have won trophies, I am really happy, I have everything and I have a better life."

Nasri left Arsenal for City in 2011, angering fans of the north London club, and has since won two Premier League titles and the League Cup.

Comments
Topics mentioned in this article
Samir Nasri France Football
Get the latest Cricket news, check out the India cricket schedule, Cricket live score . Like us on Facebook or follow us on Twitter for more sports updates. You can also download the NDTV Cricket app for Android or iOS.