Pierre-Emerick Aubameyang came off the bench to inspire Saint-Etienne to a 2-1 victory against Ligue 1 leaders Paris Saint-Germain at the Parc des Princes on Saturday in a day of contrasting fortunes for two of the league's leading strikers. 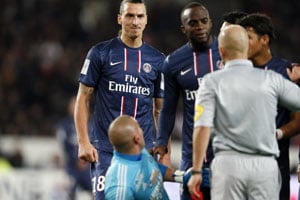 Pierre-Emerick Aubameyang came off the bench to inspire Saint-Etienne to a 2-1 victory against Ligue 1 leaders Paris Saint-Germain at the Parc des Princes on Saturday in a day of contrasting fortunes for two of the league's leading strikers.

Aubameyang, who was deemed only fit enough for a place among the substitutes, induced Mamadou Sakho to steer beyond his own keeper 10 minutes into the second half before adding a goal of his own on 73 minutes, as Zlatan Ibrahimovic saw red for a rash challenge on goalkeeper Stephane Ruffier.

"It's a great achievement, thanks to all the team. It's pleasing to beat this big team here. The coach put me on, he knew that I would be fresh. I'm a competitor, I like to start but it was well played on his part," said a delighted Aubameyang, who increased his league tally to seven goals.

Guillaume Hoarau grabbed a late consolation goal for PSG but it couldn't prevent Carlo Ancelotti's side crashing to their first league defeat of the season, a loss the Italian described as "ugly".

"Today we didn't play well and that's why we lost. Saint-Etienne played better than us and deserved to win. We didn't inject any pace into the game, we didn't have good organisation, it's normal to lose," conceded Ancelotti.

Victory for Saint-Etienne saw them climb to fourth in the table, surpassing Lyon on goal difference, while PSG's lead at the top remains at three points with chasing Toulouse and Marseille both in action on Sunday.

Ruffier was the marginally busier of the two goalkeepers in a dour first half as he was forced to palm behind Gregory Van der Wiel's attempted cross before racing off his line to make a fine block to deny Ibrahimovic.

PSG midfielder Blaise Matuidi's involvement against his former team came to a premature end as he was forced off after half an hour, having failed to shake off a knock sustained in an earlier challenge with Josua Guilavogui.

Saint-Etienne had only beaten PSG twice in 32 previous attempts in Paris and Les Verts were restricted to a solitary chance in the opening period as Salvatore Sirigu punched away Romain Hamouma's curling free-kick.

Javier Pastore glanced a header just wide from a Maxwell set-piece as PSG started the second half with far more impetus, but the introduction of Aubameyang on 52 minutes turned the game on its head.

Just minutes after his arrival, the Gabonese star combined well with Fabien Lemoine before breaking into the area and hitting a low cross that was deflected into the roof of Sirigu's net via the shin of Sakho.

The afternoon turned from bad to worse for the hosts when star striker Ibrahimovic was issued a straight red card after catching Ruffier in the midriff while trying to reach a long ball over the defence.

There appeared to be little intent from Ibrahimovic other than to play the ball, but referee Laurent Duhamel deemed the challenge a dangerous one, a view disputed by Ruffier's opposite number Sirigu.

"It's not possible to have a red card like that. It was a foul but not red."

Ancelotti also disagreed with the decision, saying: "He didn't deserve the sending off because he was looking at the ball and not the keeper."

Saint-Etienne then capitalised on their numerical advantage as Alejandro Alonso dispossed Mathier Bodmer on the halfway line before squaring to Aubameyang, who coolly slotted home to double the visitors' advantage.

Hoarau squandered a couple of chances to reduce the arrears before finally finding the target two minutes from the end, but his first league goal of the season couldn't prevent Saint-Etienne from clinching their first win in the French capital since February 2007.

Comments
Topics mentioned in this article
Zlatan Ibrahimovic St. Etienne Paris SG Pierre-Emerick Aubameyang Football
Get the latest Cricket news, check out the India cricket schedule, Cricket live score . Like us on Facebook or follow us on Twitter for more sports updates. You can also download the NDTV Cricket app for Android or iOS.