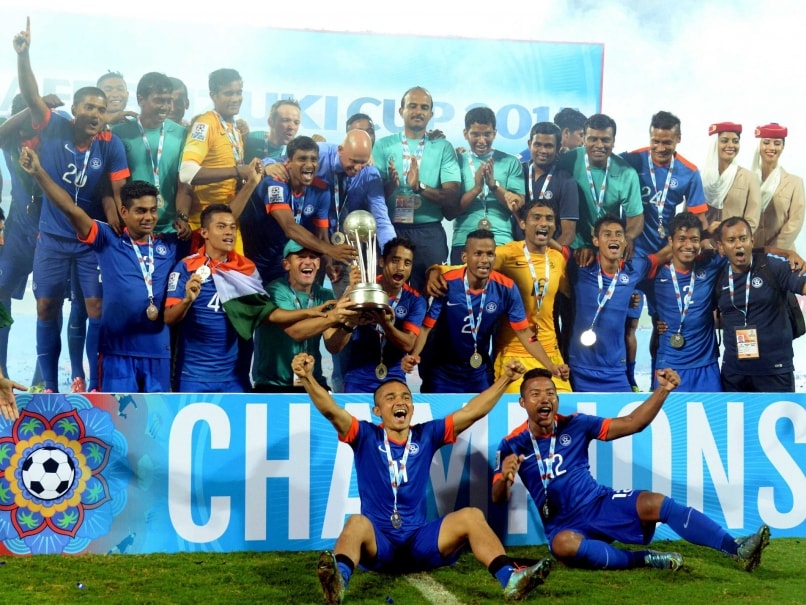 India exacted sweet revenge of their last edition defeat as they beat defending champions Afghanistan 2-1 in the summit clash in a dominating display to lift the South Asian Football Federation Cup (SAFF) for the seventh time in Thiruvananthapuram on Sunday. (Read More in Football)

India, who had lost to Afghanistan 0-2 in the final of 2013 edition in Kathmandu, were clearly the better side in the final match between the two best teams of the regional tournament though they had to come back from one goal deficit and had to settle the match in the extra time. (Highlights)

The home side under Stephen Constantine could have won by a bigger margin had the woodwork not denied them twice in the match. But at the end, India ran away victors in the third straight summit clash of the SAFF Cup between the two sides and regained the title they had won in 2011.

Jeje Lalpekhlua (72nd minute) and Sunil Chhettri (101th) scored for India after Zubayr Amiri had given Afghanistan the lead in the 69th minute at the Greenfield Stadium.

The victory for 166th ranked India over higher ranked Afghanistan (150th) today gave Constantine his first win of an international tournament after taking charge early last year for his second stint at the helm of affairs in India.

The SAFF Cup title triumph would also ease pressure on the English coach under whom India lost five and won just one match in the 2018 World Cup qualifiers while going into the tournament.

India, who were playing in the 10th final out of 11 SAFF Cup editions today, re-established their dominance in the regional tournament and are also likely to make a jump in the FIFA rankings which will come out on Thursday.

For Afghanistan, who have come in the tournament with 15 foreign-based players in their squad of 20, it was a sort of disappointment as they had targeted a title win in their final SAFF Cup participation. They will henceforth compete in the recently created Central Asian Federation.

India fielded an unchanged line-up that started in their 3-2 win over Maldives in the semifinal while Afghanistan made two changes in the first eleven that played in their 5-0 thrashing of Sri Lanka.

The defending champions had a lot of possession and gained slight upperhand with physical superiority in the initial minutes but the Indians slowly clawed their way back and began to dominate the match though the two sides went into the breather goal-less.

India though were unlucky not to have gone ahead in the 14th minute when striker Jeje Lalpekhlua's header came back after hitting the crossbar to the agony of the home supporters at the Greenfield Stadium.

As early as the seventh minute, India custodian Gurpreet Singh Sandhu had to stretched full length to his right to stopped a Mustafa Zazai shot on target. Four minutes later, he made another save from a shot by Afghan captain Faysal Shayesteh for a corner.

Egged on by the big home crowd, India began to pile pressure on Afghan defence and could have taken the lead in the 14th minute, only to be denied by the woodwork.

Jeje played the ball for Holicharan Narzary whose cross struck the trailing legs of Afghan player Zubayr Amiri and came off goalkeeper Ovays Azizi. Jeje's header on the rebound hit the crossbar and came back into play and captain Sunil Chhetri could not get on the end of it.

That was the best chance of either side in the first 45 minutes though Chhetri had another go at the Afghan goal in the 33rd minute but his left-footer after chesting sown a fine floater from Eugeneson Lyngdoh was blocked by the goalkeeper.

Both sides did not make any changes at the resumption and India applied pressure in the first 15 minutes of the second half and nearly took the lead in the 56th minute, to be denied against by the woodwork.

Chhetri played the ball for Jeje who spotted the goalkeeper off his line. But his left-footed 'chip' struck the horizontal and went out of play.

Afghanistan then had some fine moves in the Indian half and made some threatening crosses but the home side defence were able to clear them.

But they were not to be denied in the 69th minute with Zubayr Amiri giving Afghanistan the lead. Faysal's pass sneaked past Arnab Mondal and an overlapping Amiri's left footer beat Gurpreet before crashing into the Indian net.

India struck back immediately with Jeje bringing the scoreline on level terms in the 72nd minute.

India threatened to take the lead towards the end of the match but Afghan goalkeeper were upto the task to deny them. First, he tipped over Narayan Das' long range effort in the 84th minute after the Indian player saw the goalkeeper off his line, and then saved Chhetri's right footer from a free-kick.

The match went into the extra time and talismanic captain Chhetri scored the winner. Chhetri got the better of Afghan defender Hashemi and he kept his balance intact before sending his low right-footed sliding shot into the corner of the net to the wild jubilation of the home crowd.

Comments
Topics mentioned in this article
Sunil Chhetri Jeje Lalpekhlua Football
Get the latest updates on ICC T20 Worldcup 2022, check out the Schedule and Live Score. Like us on Facebook or follow us on Twitter for more sports updates. You can also download the NDTV Cricket app for Android or iOS.