The word 'monkey' can have racist connotations, but although the joke concludes with the words "feed the monkey", it is not racist in nature. Townsend is of Cypriot and Jamaican descent. 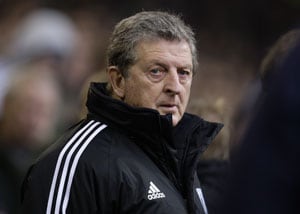 England manager Roy Hodgson apologised on Thursday following British media reports that he offended a member of his squad by telling a joke about a monkey.

Several newspapers claimed that Hodgson told the joke at half-time of his side's 2-0 win over Poland on Tuesday, which saw them qualify for next year's World Cup in Brazil.

According to the reports, Hodgson encouraged his players to pass the ball to in-form Tottenham Hotspur winger Andros Townsend by telling a joke about a monkey being sent into space by US space agency NASA.

The word 'monkey' can have racist connotations, but although the joke concludes with the words "feed the monkey", it is not racist in nature. Townsend is of Cypriot and Jamaican descent.

In a statement, Hodgson said: "I would like to apologise if any offence has been caused by what I said at half-time.

"There was absolutely no intention on my part to say anything inappropriate. I made this clear straight away to Andros in the dressing room.

"I also spoke to Andros again on Wednesday. He has assured me and the FA (Football Association) he did not take any offence, and understood the point I was making in the manner I intended."

Hodgson received support from England striker Wayne Rooney, who wrote on Twitter on Thursday: "Seen the story on roy this morning. He done nothing wrong. This is ridiculous."

The joke, which reportedly emerged at NASA in the 1960s and 1970s, is about a man being sent into space for the first time alongside a monkey.

The astronaut becomes frustrated that the monkey is being asked to do all the work and radios mission control to ask what he should do.

Former England striker Stan Collymore was critical of the newspaper reports, writing on Twitter that the joke was inoffensive and that the story "demeans every anti racism campaigner by having (a) cheap pop at RH (Hodgson) who said NOTHING WRONG."

Comments
Topics mentioned in this article
Australia Cricket Team England Cricket Team West Indies Cricket Team Football
Get the latest updates on ICC T20 Worldcup 2022 and CWG 2022 check out the Schedule, Live Score and Medals Tally. Like us on Facebook or follow us on Twitter for more sports updates. You can also download the NDTV Cricket app for Android or iOS.