Soldado admitted that Spain, for all the intricate passing patterns they weave, need to concentrate more on scoring goals. 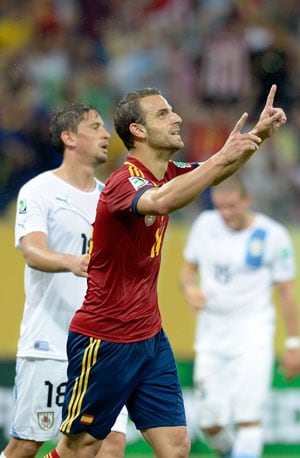 With one-time golden boy Fernando Torres benched it was left to a less-heralded Spanish striker, Roberto Soldado, to show that the world champions still know where the net is.

It was his goal that cemented a 2-1 Confederations Cup win over Uruguay on Sunday.

Spain's possession-based "tiki-taka" style is designed to frustrate the best of opponents: you can't score if you don't have the ball.

So with 71 percent of the possession - a staggering 92 percent in the opening stages - the world and European champions should have won by a country mile.

Yet Luis Suarez's late free kick reduced the margin to a meagre 2-1.

And that prompted Soldado to admit that Spain, for all the intricate passing patterns they weave, do need to concentrate more on going for the jugular - or in future risk possibly drawing matches they ought to win.

That strategy would be a risky business in the knockout stages. The lottery of penalties would then come into play, potentially undermining their chances of making it four tournament wins on the trot after the 2010 World Cup and the past two editions of the European Championships.

"They were difficult opponents - they were always keeping the pressure on and trying to close us down," said Valencia forward Soldado. His goal on 32 minutes ultimately clinched the win after Diego Lugano had deflected Pedro's early effort for the Spanish opener.

At that stage, the floodgates looked certain to open, but despite their wonderful approach play the Spanish just could not hit the target thereafter. Soldado acknowledges that superiority has to be rubbed in in terms of goals - not possession.

"We have to recognise this. and it is a shame that we didn't manage to score more goals and put the match to bed. We certainly had the chances," he said.

Midfield star Andres Iniesta said that after their fine start Spain had tired in sticky and wet conditions.

"The first half, we were dangerous, we moved the ball around. It was the opening match and it was key to win it. The second half we dropped off the pace a bit with tiredness and the humidity, but Spain deserved the win."

Even though Spain struggled to turn on the scoring tap, coach Del Bosque resisted the temptation to give Torres a run out.

Instead, he preferred to give Santi Cazorla 25 minutes as he came on for Cesc Fabregas and the more defensively minded Javi Martinez, who replaced Xavi with a quarter hour remaining.

Whatever Del Bosque's motives for keeping Torres in cold storage, the Spanish media were more interested in his choice Sunday of Iker Casillas as keeper.

"I don't have to have a reason for playing Iker. He is one of the leaders of this squad. There are others, but he is the captain," said Del Bosque.

"I do what is best for the team. That is not to the detriment of our two other keepers (Pepe Reina and Victor Valdes), who are both excellent."