Martinez's side won the first major trophy in the club's 81-year history in sensational fashion on Saturday as Ben Watson's stoppage-time header clinched a 1-0 win over City at Wembley. 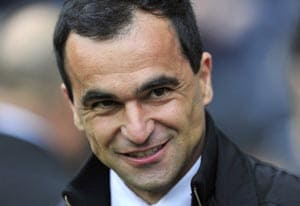 Wigan manager Roberto Martinez has called on his FA Cup final heroes to use their stunning victory over Manchester City as inspiration to keep alive their Premier League survival bid at Arsenal on Tuesday.

Martinez's side won the first major trophy in the club's 81-year history in sensational fashion on Saturday as Ben Watson's stoppage-time header clinched a 1-0 win over City at Wembley.

Given the vast disparity between Wigan and City's spending power, the victory deserves to be ranked alongside Wimbledon's 1988 win against Liverpool and Sunderland's 1973 victory over Leeds as one of the greatest final upsets in the competition's long history.

But Martinez and his players have no time to rest on their laurels with their top-flight status in severe danger after Sunday's results left them clinging to survival by a slender thread.

With third-bottom Wigan four points behind fourth bottom Sunderland, Martinez knows a defeat against the Gunners will seal their relegation, while even a draw would effectively send them down given Sunderland have a vastly superior goal difference.

But Martinez hopes the high of beating City will lift Wigan for one last push against an Arsenal team in need of the points themselves to climb back into the top four.

"From an emotional point of view, yes winning at Wembley will help," Martinez said.

"From a physical point of view, I don't know how quickly we can recover.

"We're playing against Arsenal with six or seven players missing through injury, but we're a club that always plays against adversity and we don't moan about it.

"It's a shame the final couldn't be the final game of the season and we could be now celebrating.

"But the chairman was looking after the dressing room for me and there was no champagne, believe me."

Wigan's cause is hardly helped by Arsenal's situation.

Tottenham climbed two points above the Gunners with a win at Stoke on Sunday, leaving Arsenal with no margin for error against Wigan as they try to qualify for the Champions League.

But Martinez is encouraged by the way his team rose to the occasion against supposedly superior opposition at Wembley and sees no reason why they can't produce a repeat at the Emirates Stadium.

"We've been having a very good season in terms of performances. That wasn't an accident against City," he said.

"It didn't happen by mistake, it happens because the players have been playing like that for 10 months.

"Nobody will take away the trophy and the proud moment that all the Wigan fans are going to have. Winning the FA Cup is something special in the British game.

"It's an incredible achievement. But we're playing in Europe next season and you need to be at the top level because if not, you can lose players and it will be a distraction.

"I think we can do that in the next two games and stay up, which you know for us is winning the title."

Arsenal have no time to show any mercy to Wigan.

Failure to qualify for Europe's elite competition for the first time in 16 years would be a disaster after another trophyless season for Arsene Wenger's side.

Arsenal goalkeeper Wojciech Szczesny, back in the team after a poor run of form earlier this season, admits his side would sacrifice winning in style if they can grind out the results needed to finish in the top four.

"I would settle for another two 1-0 wins in the rest of the season and a place in the top three," Szczesny said.

"It might have been boring at times when we won at QPR, but we couldn't care less at this time.

"Hopefully it will be back to the old days and hopefully we will get back to winning trophies as well."