Chelsea coach Roberto Di Matteo has questioned his team's treatment at the hands of match officials in the wake of the club's controversial Premier League defeat by Manchester United at the weekend. 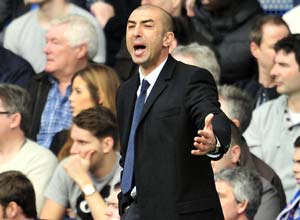 Chelsea coach Roberto Di Matteo has questioned his team's treatment at the hands of match officials in the wake of the club's controversial Premier League defeat by Manchester United at the weekend.

Di Matteo's side gained swift revenge by beating Alex Ferguson's men 5-4 after extra time to reach the last eight of the League Cup on Wednesday - three days after the 3-2 loss that was marked by the dismissal of Chelsea's Branislav Ivanovic and Fernando Torres by referee Mark Clattenburg.

Chelsea subsequently lodged a formal complaint to the Football Association about comments directed by Clattenburg towards John Mikel Obi.

Di Matteo refused to discuss that matter, which is also being investigated by the police.

But, drawing parallels with the defeat at Queens Park Rangers 12 months ago, which also ended with the dismissal of two Chelsea players, Di Matteo questioned whether his side were being treated fairly.

"It's incredible we got two players sent off in one game," he said. "At QPR, one was correct and one was probably not correct.

"And on Sunday (against United) one was harsh and probably correct and the second one was 100 percent not correct, so it's incredible that always it's Chelsea Football Club. So maybe that's something to think about, you know?"

Chelsea were awarded two penalties by referee Lee Mason in the second meeting with United on Wednesday, the second of which was converted by Eden Hazard in the final seconds to take the tie into extra time.

But Di Matteo believes his side were denied a legitimate third penalty when Juan Mata's cross hit United centre-back Michael Keane on the arm.

And he added: "We just want to be treated fairly by everybody. Nobody is talking about the handball in the second half when we should have had a penalty."

The Blues manager, though, does not believe Chelsea will suffer a reaction from match officials because of the decision to make a complaint against Clattenburg.

"I think the referees should be going into the games with the most confidence they can have," he said.

"You know we're under pressure here -- the players, the officials, the coaching staff -- to perform, and I don't think there is any prejudice from that point of view."

Chelsea fought back three times as first Ryan Giggs, Javier Hernandez and then Nani put United ahead, with the hosts replying through David Luiz's penalty, Gary Cahill's header and then Hazard's late spot-kick.

Daniel Sturridge and Ramires put the hosts in control in extra time and Giggs' 120th-minute penalty came too late to affect the outcome.

Ferguson was left frustrated at Nani's failure to keep the ball in the final seconds of extra time.

Ferguson said: "We gave the ball away for the third goal. We were in control of the match at that point. We were playing good football and all we needed to do was to keep possession.

"But Nani decided to try and beat a player, lost the ball, and that allowed Chelsea to get at us. I don't know if it was a penalty kick or not but nonetheless...

"(Nani) is experienced but he is an individual; he's a player who wants to beat men and we are not going to discourage him from that, but in that situation, if he had kept the ball near the corner flag, then the game's over."

"We had to gamble in terms of the young centre-backs," he said.

"It's not easy. You can use young forwards but playing young central defenders away from home in a game of this magnitude is not easy and that's how it proved."

Comments
Topics mentioned in this article
Football Chelsea Arsenal Liverpool Newcastle United Manchester United Njazi Kuqi Wayne Rooney
Get the latest updates on IPL 2021, IPL Points Table , IPL Schedule 2021 , live score . Like us on Facebook or follow us on Twitter for more sports updates. You can also download the NDTV Cricket app for Android or iOS.