Bayern Munich topped the Bundesliga for the first time this season with a 7-0 thrashing of Bochum on Saturday as Robert Lewandowski scored again. 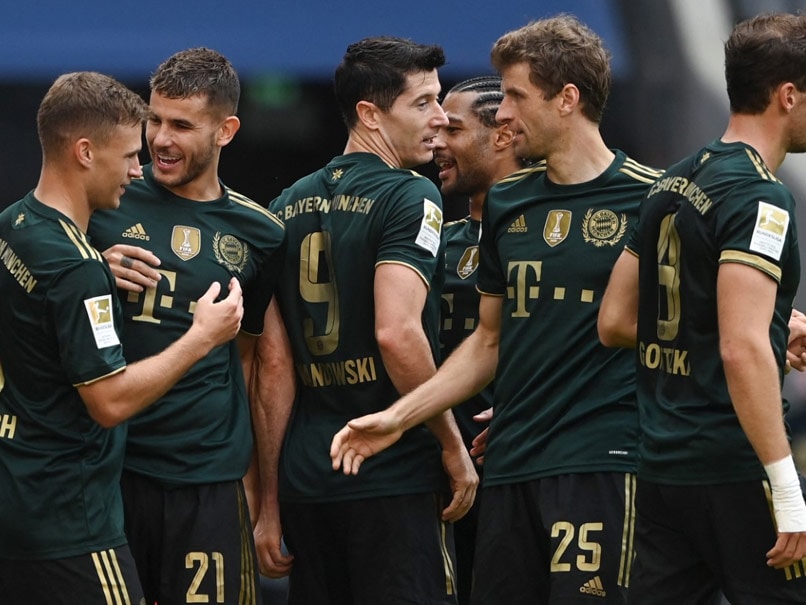 Bayern Munich players celebrate a goal against Bochum in the Bundesliga on Saturday.© AFP

Bayern Munich topped the Bundesliga for the first time this season with a 7-0 thrashing of Bochum on Saturday as Robert Lewandowski scored for a record 13th consecutive home league game. Joshua Kimmich netted twice while Lewandowski poached a second-half goal to claim another league record as Leroy Sane, Serge Gnabry and Eric Maxim Choupo-Moting all scored for Bayern. Greek defender Vasilios Lampropoulos scored a first-half own goal as Bochum ran out of luck at the Allianz Arena. "Bochum worked hard, but everything went right for us after the first goal," Sane told Sky.

Bayern will lose top spot in the league table if Wolfsburg maintain their 100 percent record with a fifth straight win on Sunday against Eintracht Frankfurt.

Bayern have won their last seven games, scoring at least three goals on each occasion, with Dortmund, Leipzig and Barcelona on the list of defeated opponents.

Bochum, who have now won just once in 35 games at Bayern, were 4-0 down at half-time.

Fresh from their Champions League win at Barcelona on Tuesday, Bayern head coach Julian Nagelsmann made three changes to the starting line-up.

Josip Stanisic and Lucas Hernandez came into the back four with Gnabry on the right wing for Jamal Musiala.

Sane was whistled by disgruntled Bayern fans during the Bavarian giants' opening games this season after a series of below-par performances.

However, the 25-year-old has since flourished with five assists and three goals in the last five games and also netted twice for Germany during this month's World Cup qualifiers.

"It's not something I want to go through again," admitted Sane when asked about being whistled earlier in the season.

"Things are going well for me, I played well today but there are always things to improve on."

The ex-Manchester City winger started the rout by curling in a spectacular free-kick over a wall of defenders from 30 yards out.

Sane then laid on a cross which Kimmich fired past Bochum goalkeeper Manuel Riemann.

Gnabry made it 3-0 by finishing a counter-attack and guiding his shot inside the far post.

Bochum's luck had completely deserted them when Lampropoulos intercepted a pass to Lewandowski, only to roll the ball into his own goal.

It was 45 years to the day since Bayern recovered from 4-0 down at half-time in Bochum to claim a stunning 6-5 win, but there was to be no fairytale revenge on Saturday.

Sane again dribbled into the box, rolled a pass to Gnabry, who flicked the ball onto Lewandowski to tap in and claim his latest Bundesliga record after scoring a new milestone of 41 goals in Germany's top flight last season.

Kimmich slotted home a towering Goretzka header before Lewandowski's replacement Choupo-Moting found the net at the third attempt after his first two shots were saved.

Thomas Mueller had a late goal ruled offside by the VAR which was little comfort for Bochum, who suffered their heaviest Bundesliga defeat.

Robert Lewandowski Football
Get the latest updates on T20 World Cup, check out the T20 World Cup Schedule and Live Score . Like us on Facebook or follow us on Twitter for more sports updates. You can also download the NDTV Cricket app for Android or iOS.