Manchester United defender Rio Ferdinand admits he is resigned to the fact that his international career is over following his controversial omission from England's Euro 2012 squad. 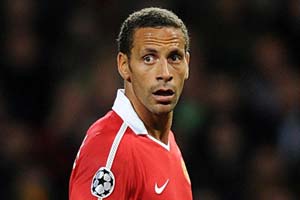 Manchester United defender Rio Ferdinand admits he is resigned to the fact that his international career is over following his controversial omission from England's Euro 2012 squad.

England manager Roy Hodgson insists Ferdinand was left out of his 23-man squad for "footballing reasons" but critics believe the decision is related to the racism saga involving team-mate John Terry.

Criticism of Ferdinand's omission intensified last week after the United defender was ignored following the injury withdrawal of Gary Cahill in favour of the inexperienced Liverpool defender Martin Kelly.

With Hodgson only recently appointed on a four-year deal, 33-year-old Ferdinand accepts the curtain has come down on his England career.

"You would have to say it might be over with England for me. If I'm not getting picked now, especially when people are out injured, then it's unlikely I will be picked again," he told The Sun.

"I always said I wouldn't retire from international football until I stopped playing and I won't. I will still be available."

Ferdinand meanwhile was unapologetic about his angry reaction to being overlooked for the squad.

"If you aren't disappointed by being left at home when your country is playing in tournaments like this then there's a problem and you shouldn't be in professional football," he said.

"I'm in this game to achieve as much as I can. I'm paid to win and be a sore loser. I want to play in the big games and win big trophies. If that's a crime then I'm a criminal."

Comments
Topics mentioned in this article
Gary Cahill Martin Kelly Football John Terry Rio Ferdinand
Get the latest updates on ICC T20 Worldcup 2022 and CWG 2022 check out the Schedule, Live Score and Medals Tally. Like us on Facebook or follow us on Twitter for more sports updates. You can also download the NDTV Cricket app for Android or iOS.