Alfredo di Stefano was one of Real Madrid's most celebrated players, having represented the club for 11 seasons between 1953 and 1964, winning five European Cups 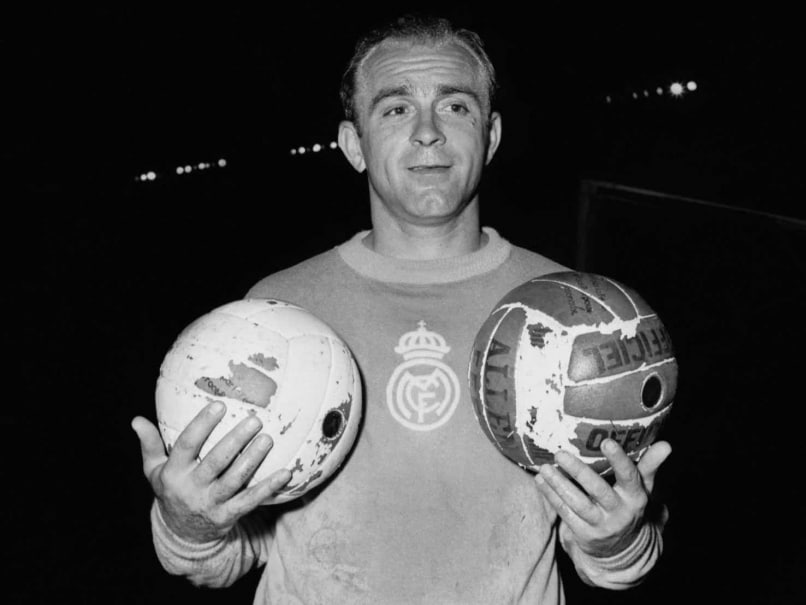 Real Madrid legend Alfredo di Stefano, one of the greatest footballers in history, died in a Spanish hospital on Monday aged 88, the club said.

The Argentine-born former striker and honorary president was "the best player of all time", Real Madrid said.

Di Stefano had been taken to hospital after suffering a heart attack on Saturday.

Rescuers had battled for 18 minutes to revive the 88-year-old after his heart stopped following a restaurant lunch with his family near Real's Santiago Bernabeu stadium.

He had been taken in a serious condition to the Gregorio Maranon hospital which later said he was in a coma, had been sedated and was breathing with the help of a machine.

"Alfredo Di Stefano died today at 5:15 pm" (1515 GMT) at the Gregorio Maranon hospital in the Spanish capital, Real Madrid said in a statement on Monday.

"Real Madrid Football club's president Florentino Perez and the club's board of directors wish to express their deepest condolences and all their love and affection to his children, his family and friends," it added.

"Real Madrid extends its condolences to its fans around the world and to those who are feeling the emotion of losing the best player of all time."

On Saturday, newspaper El Pais said Di Stefano had been eating with his family when he felt ill and sat down in his wheelchair. By the time an ambulance arrived he was in cardiorespiratory arrest.

Di Stefano, who had previously been hospitalised for similar episodes, underwent emergency quadruple heart by-pass surgery after a heart attack in 2005.

He was one of Real Madrid's most celebrated players, having represented the club for 11 seasons between 1953 and 1964, winning five European Cups.

Di Stefano was born in Buenos Aires and began his professional career with hometown club River Plate in 1945 before leaving for Colombian outfit Millonarios four years later after the Argentine league ground to a halt following a pay strike.

Di Stefano won the Colombian title in his first season before adding the 1951 and 1952 titles to his list of honours but it was his individual displays that attracted the attention of a host of big-name European suitors.

It was ultimately Real Madrid who won the race for Di Stefano's signature after a long, complicated transfer wrangle with bitter rivals Barcelona.

Di Stefano immediately flourished in the Spanish capital as he helped Real Madrid end a 21-year wait for the league title in his first season before collecting a further seven league crowns during his time at the club.

However, it was on the European stage that Di Stefano truly cemented his status as one of the game's greats, helping Real win the first five editions of the European Cup between 1956 and 1960, a record that stands to this day.

Comments
Topics mentioned in this article
Real Madrid Football
Get the latest updates on ICC Women's Cricket World Cup 2022 and IPL 2022, check out the Schedule , Live Score and IPL Points Table. Like us on Facebook or follow us on Twitter for more sports updates. You can also download the NDTV Cricket app for Android or iOS.