Although his side are well-placed to reach the final, Benitez says Chelsea must learn from the misfortunes that befell Tottenham Hotspur. 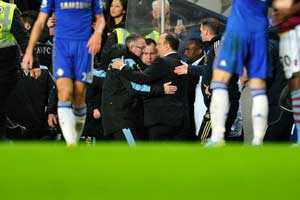 Chelsea interim manager Rafael Benitez has challenged his side to channel the will to win they showed in roaring back to snatch a 2-1 win at FC Basel in the first leg of their Europa League semi-final.

Chelsea needed a 94th-minute free-kick from David Luiz to prevail at St Jakob-Park on Thursday, having seen Victor Moses' 12th-minute opener cancelled out by a controversial Fabian Schar penalty three minutes from time.

Benitez said he had been "surprised" by referee Pavel Kralovec's decision to award a penalty for a challenge on Valentin Stocker by Cesar Azpilicueta, and said his side's late response had been fuelled by a sense of injustice.

He also called on his players to funnel that desire into the campaign to secure a place in next season's Champions League, which continues with a game at home to Swansea City in the Premier League on Sunday.

"We had this thing that we didn't deserve to concede this goal, so it was extra motivation," he said.

"The keeper could have saved the free-kick but in the end we scored the goal and I think everyone was thinking it was fair.

"We're working so hard and when you can win these kind of games, the feeling is much better. (The Premier League) is a different competition but we have to take the positives and try to keep the momentum."

Although his side are well-placed to reach the final, Benitez says Chelsea must learn from the misfortunes that befell Tottenham Hotspur.

Spurs were beaten on penalties by Basel after a 4-4 aggregate draw in the quarter-finals and Benitez says his side will need to show due care in their return leg at Stamford Bridge next week.

"We have the experience of Tottenham, so we know this is a very good team and they can score goals home and away," the Spaniard said.

"We have to be sure we are concentrated and not over-confident, and do our job. If we play well, we can beat anyone, so we have to do it."

Luiz had been fortunate to escape with only a yellow card after catching Philipp Degen on the shin with an ugly foul shortly before Basel's equaliser.

However, Benitez said the Brazilian, who played in an unfamiliar defensive midfield role, had been the recipient of rough treatment himself.

"He did a great job. They were pressing him a lot of times and he was getting some fouls (against him)," Benitez said.

"Maybe the yellow card was right because it was a bit late."

Ashley Cole made his return to the Chelsea starting line-up after over three weeks out with a hamstring injury, only to receive a caution that rules the left-back out of the second leg.

"We will miss him for this game, but Ryan (Bertrand) is doing well anyway," Benitez said.

Basel coach Murat Yakin expressed hope that, despite several differences in style between Tottenham and Chelsea, his side would draw on their achievements in the last eight when they travel back to London next week.

"It's two different teams who play different football," he said. "Tottenham try to play more creatively and we were able to do our own match (against them).

"Chelsea acted more defensively compared to Tottenham and were looking out for the counter-attack but we managed to keep them busy in their half.

"I think we still have a chance in the return leg. The best thing would be to keep a clean sheet. It will be difficult but we will travel there to do our best."

Comments
Topics mentioned in this article
Football Liverpool Arsenal Chelsea Tottenham Hotspur FC Basel Brazil Cesar Azpilicueta
Get the latest Cricket news, check out the India cricket schedule, Cricket live score . Like us on Facebook or follow us on Twitter for more sports updates. You can also download the NDTV Cricket app for Android or iOS.