The FIFA World Cup 2022 draw in Doha was attended by 2,000 guests, and featured former World Cup winners Cafu and Lothar Matthaeus among the draw assistants. 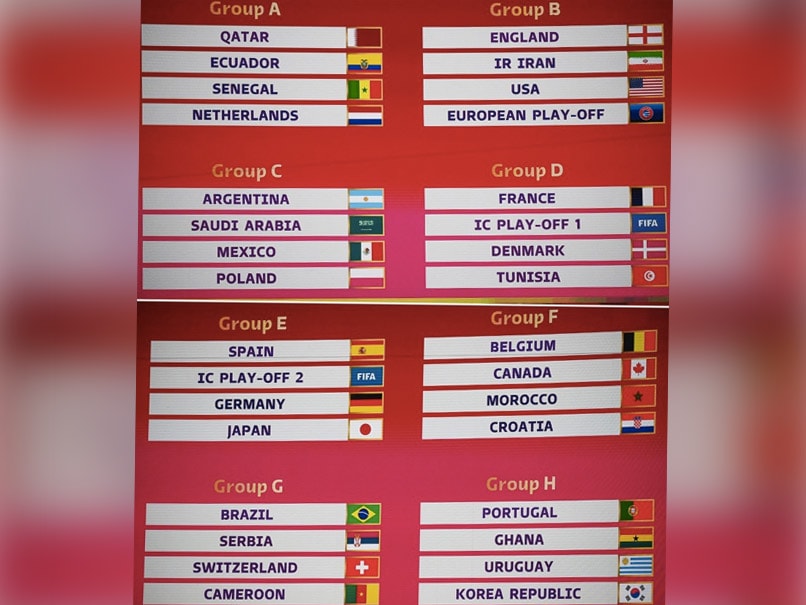 Former winners Germany and Spain will clash early in the World Cup finals in Qatar.© AFP

Former winners Germany and Spain will clash early in the World Cup finals in Qatar after being placed in the same group while the coaches of bitter geopolitical rivals United States and Iran vowed to put animosity aside when their sides meet. The glitzy draw in Doha on Friday also set reigning champions France on a potential collision course with England in the quarter-finals, if they win their relatively kind groups. But the world's top-ranked team Brazil face a tougher task in the first stage. The French, seeking to become the first nation to win back-to-back World Cups since Brazil in 1962, will meet familiar foes Denmark and Tunisia in a Group D completed by the winners of an intercontinental play-off -- Australia, Peru or the United Arab Emirates.

Here's a look at each group following Friday's draw in Doha for the 2022 Qatar World Cup:

Qatar, ranked 51st in the world, are appearing at their first World Cup but were among the top seeds thanks to their privileged status as hosts. With a squad of home-based players under Spanish coach Felix Sanchez, they are a little-known quantity to most. The Netherlands, whose coach Louis van Gaal recently criticised the decision to make Qatar hosts, will hope to make a big impact as they return after missing 2018. Sadio Mane's Senegal will also be keen to impress off the back of winning their first Africa Cup of Nations, while Ecuador are back for their fourth finals appearance.

England will be delighted with this draw in a group dominated by the clash between geopolitical rivals Iran and the USA. Iran topped their qualifying group under Croatian coach Dragan Skocic and have been regulars at recent tournaments. They may benefit from playing so close to home too, but the returning USA will be eager to impress with Chelsea's Christian Pulisic their star.

England could also have a local derby to look forward to should Wales or Scotland come through the final European play-off in June, but Ukraine remain in contention.

Attention is immediately drawn to the clash between Lionel Messi's Argentina and Robert Lewandowski's Poland. Off the back of their Copa America victory last year, Argentina will be among the contenders and this is surely Messi's last chance to win the World Cup, or even score a goal in the knockout phase.

Poland last appeared in the World Cup knockouts in 1986 and they face a challenge making the last 16 given the presence of Mexico, who have made the first knockout round at the last seven tournaments only to lose each time.

They are coached by an Argentine in Gerardo Martino, while Frenchman Herve Renard leads rank outsiders Saudi Arabia.

France were in the same group as Denmark on their way to winning the World Cup in 1998 and 2018 but also in 2002 when Les Bleus went out in the group stage. While France defend their trophy, the 11th-ranked Danes are dangerous outsiders after reaching the Euro 2020 semi-finals. No team has retained the World Cup since Brazil in 1962.

France were also in a group with Peru and Australia in 2018 and both are still in contention in the intercontinental play-off, as are the United Arab Emirates. Tunisia's squad features several French-born players.

Spain against Germany on November 27 is the tie of the opening round and the assumption is it will be crucial in deciding who tops the group out of the two former World Cup winners, although that could set them on a path to play Brazil in the quarter-finals. Hajime Moriyasu's Japan will hope to have their say in a country where they won the Asian Cup in 2011. The remaining place will be taken by the winner of a play-off between Costa Rica and New Zealand and the prospect of either going far seems remote.

Belgium were until recently the top-ranked national team in the world and came third in 2018. With the likes of Kevin De Bruyne, Romelu Lukaku and Thibaut Courtois, they have plenty of world-class players but Eden Hazard's decline has been steep. They should top the group, with Croatia unlikely to come close to their run to the 2018 final now that Luka Modric turns 37 this year.

Morocco's squad is full of European-based talent such as Paris Saint-Germain's Achraf Hakimi. Canada, under English coach John Herdman, are at their first World Cup since 1986. They topped CONCACAF qualifying and have the excellent Lille striker Jonathan David.

Brazil were in the same group as Serbia and Switzerland just four years ago. Tite's side cruised through qualifying and are now targeting their sixth World Cup. However, it remains to be seen how Neymar, now 30, handles the pressure and if he stays fit.

Switzerland, who reached the Euro 2020 quarter-finals, are favourites to go through with Brazil. Cameroon are back after missing 2018 and dramatically defeating Algeria in the African play-offs, but they will struggle to go far.

At almost 38, it will surely be Cristiano Ronaldo's last chance to win the World Cup. Yet Portugal have so much talent in their squad that some think they could even be better off without him. They will hope to avenge a defeat to Uruguay in the last 16 in 2018 -- Uruguay have an ageing star striker of their own in 35-year-old Luis Suarez.

South Korea, with a Portuguese coach in Paulo Bento, will again struggle to go beyond the group phase while 60th-ranked Ghana are not the team of 2010 and were not expected to qualify.