During the surgery Saturday, "damage in multiple structures in his forearm was revealed", according to a statement by the medical staff of PSV. 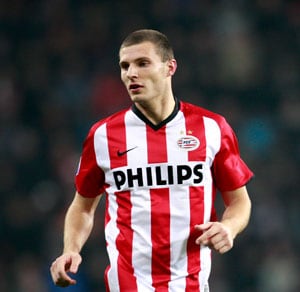 Dutch football club PSV Eindhoven will miss Erik Pieters for several weeks after the defender got injured while smashing a window in anger following a red card in the game against PEC Zwolle.

Dutch international Pieters made his comeback after eight months on the sidelines due to injuries. He was sent off in the 67th minute for a tackle on Benson. On his way to the dressing room, the leftback kicked against a door and punched a window in anger. Due to a big cut in the arm he was immediately taken to the hospital, reports Xinhua.

During the surgery Saturday, "damage in multiple structures in his forearm was revealed", according to a statement by the medical staff of PSV.

Eredivisie league leaders PSV Eindhoven suffered a shock 1-3 home defeat against PEC on Friday in their first match after the winter break. Tim Matavz scored for the home-team, but Fred Benson (twice) and Wiljan Pluim led the visitors to victory.

Comments
Topics mentioned in this article
Football Liverpool PSV Eindhoven Fenerbahce AC Milan Erik Pieters
Get the latest updates on ICC T20 Worldcup 2022 and CWG 2022 check out the Schedule, Live Score and Medals Tally. Like us on Facebook or follow us on Twitter for more sports updates. You can also download the NDTV Cricket app for Android or iOS.