Thiago Silva will miss Ligue 1 games against SC Bastia, Evian and Saint-Etienne and probably Brazil's friendlies in the United States next month against Colombia and Ecuador. 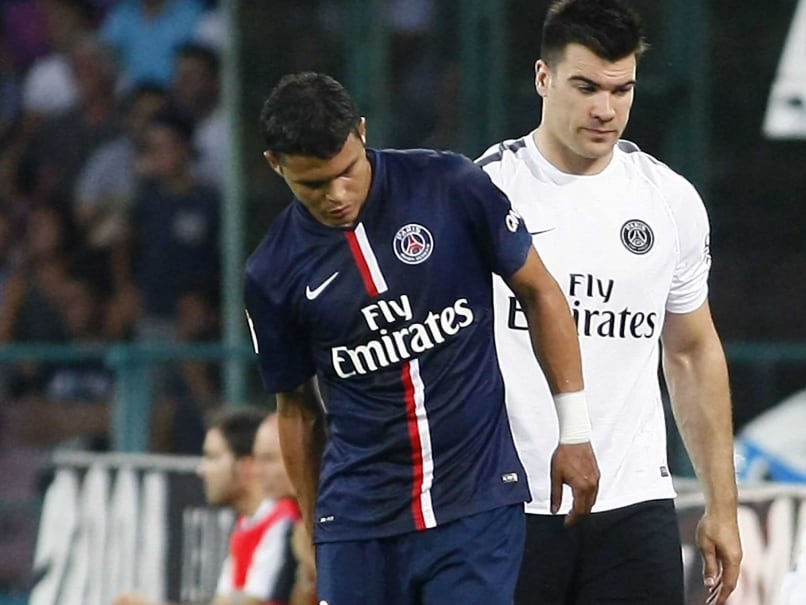 Paris Saint-Germain defender Thiago Silva leaves the pitch after being injured during the friendly against SSC Napoli.© AFP
Paris:

Paris Saint-Germain captain Thiago Silva will be out for "several weeks" with the hamstring injury that forced him off early in Monday's friendly against Napoli, the French champions confirmed on Wednesday.

"Tests undergone by Thiago Silva yesterday (ultrasound and MRI) have confirmed an injury to his right hamstring. He will be unavailable for several weeks," read a statement on PSG's website.

The Brazilian centre-back lasted just 12 minutes of Monday's 2-1 win in Italy before having to come off after back-heeling the ball in his own penalty box.

He is now unlikely to return until after the international break at the start of September, meaning he will miss Ligue 1 games against SC Bastia, Evian and Saint-Etienne and probably Brazil's friendlies in the United States next month against Colombia and Ecuador.

However, PSG will hope that he is able to return in time for the start of the Champions League group stage on September 16 or 17.

Silva surprised many by starting in last Friday's 2-2 draw at Reims in the opening Ligue 1 game of the new season, just days after returning to Paris following a holiday in the wake of the World Cup in his native Brazil.

Paris coach Laurent Blanc insisted that the 29-year-old was in condition to play in that game, but questions will now be asked as to whether he returned too soon.

In his absence, compatriots Marquinhos and David Luiz are likely to form PSG's centre-back pairing.

Comments
Topics mentioned in this article
Thiago Silva David Luiz Brazil Paris SG Football
Get the latest updates on India vs Australia Series, check out the India vs Australia Schedule for 2020-21 and Ind vs Aus live score . Like us on Facebook or follow us on Twitter for more sports updates. You can also download the NDTV Cricket app for Android or iOS.