PSG held as David Beckham returns to scene of 1998 shame

Both Ibrahimovic and Beckham angrily confronted the referee at the final whistle. "We all make mistakes, even the referee makes mistakes, we are all human," said Ibrahimovic. Beckham had a late chance to win the match for PSG with a free-kick just outside the box but curled his shot, towards the left-hand corner, drifted just past the post. 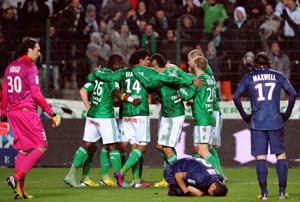 David Beckham returned to the scene of his infamous 1998 World Cup red card horror show on Sunday, but was unable to inspire his Paris Saint-Germain team to victory in a 2-2 draw with Saint-Etienne.

Beckham was sent-off for kicking out at Diego Simeone early in the second half of England's 1998 World Cup last-16 clash against Argentina at Saint-Etienne's Geoffroy-Guichard stadium, a match which the South Americans won on penalties.

The former Manchester United, Real Madrid and LA Galaxy star became a national scapegoat amongst home fans and media for his sending-off, his act of petulance widely seen as the cause of England's exit.

On Sunday, the 37-year-old former England skipper started his first league game for the Ligue 1 title-chasers, but saw his team throw away a 2-0 advantage.

The result means PSG are now five points ahead of Lyon and seven up on Marseille with nine games to play.

Javier Pastore and Zlatan Ibrahimovic put the visitors 2-0 ahead with first-half strikes, but an Alex own-goal just before half-time and a wonderful finish from Francois Clerc with 18 minutes left meant the two sides shared the spoils.

"We're really disappointed because we should have won and there was a clear foul before the equaliser. He could have broken (Thiago) Silva's leg," said PSG 'keeper Salvatore Sirigu following the controversial equaliser.

The visitors got off to the perfect start on nine minutes when Argentine Pastore worked his way into the box before chipping the ball over on-rushing Saint-Etienne 'keeper Stephane Ruffier.

It got even better for Carlo Ancelotti's men 10 minutes later when Swedish superstar Ibrahimovic converted a penalty following a foul by Ruffier on Ezequiel Levazzi inside the area.

It was his league-leading 25th goal of the season.

Saint-Etienne grabbed a lifeline eight minutes before half-time when PSG's Brazilian defender Alex bundled the ball into his own goal past a startled Sirigu after a scramble in the box.

But PSG still appeared to have the match in hand and were on their way to a seven-point lead at the top before it all went wrong following some sloppy defensive work that led to the equaliser.

Right-back Clerc picked up a loose ball inside the PSG penalty area on 72 minutes and drove an unstoppable shot past Sirigu and into the right hand corner for his first goal of the season.

However, just before the goal, a dreadful foul on Thiago Silva should have stopped play.

Both Ibrahimovic and Beckham angrily confronted the referee at the final whistle.

"We all make mistakes, even the referee makes mistakes, we are all human," said Ibrahimovic.

"It was a simple chat at the end. The referee told me to calm down and I told him also to calm down."

Beckham had a late chance to win the match for PSG with a free-kick just outside the box but curled his shot, towards the left-hand corner, drifted just past the post.

In earlier games, Nice suffered a massive blow to their Champions League ambitions as they crashed to a 1-0 defeat at relegation-threatened Nancy while Toulouse and Bordeaux played out a 0-0 draw.

Comments
Topics mentioned in this article
Football David Beckham AC Milan Paris SG Zlatan Ibrahimovic Javier Pastore
Get the latest Cricket news, check out the India cricket schedule, Cricket live score . Like us on Facebook or follow us on Twitter for more sports updates. You can also download the NDTV Cricket app for Android or iOS.