The day after David Beckham joined the club on a five-month deal, PSG moved provisionally three points clear of Lyon at the top of the French League table with a 4-0 win over Toulouse. 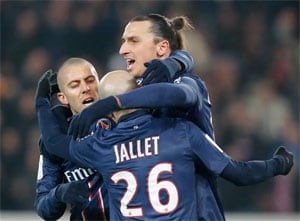 Zlatan Ibrahimovic scored his 20th league goal in as many games to help Paris Saint-Germain thrash Toulouse 4-0 away from home and move provisionally three points clear of Lyon at the top of the French league.

The day after David Beckham joined the club on a five-month deal until the end of the season, PSG sent out a statement to Lyon and third-place Marseille with a dominant performance.

Argentine playmaker Javier Pastore put PSG ahead in the third minute and Ibrahimovic headed home in the 34th minute to make it 2-0, shortly before left back Cheik M'Bengue got sent off after collecting a second yellow card.

Center half Mamadou Sakho and right back Gregory van der Wiel scored in quick succession in the second half to seal a convincing win.

"The key was the start to the match, we scored two quick goals and then controlled things well," PSG coach Carlo Ancelotti said. "We have a lot of games coming up now with the Champions League. The team's looking good and we're well set up. But we have a lot of respect for Lyon and Marseille."

PSG took the lead when Argentina winger Ezequiel Lavezzi crossed from the right and Pastore volleyed the ball into the opposite corner.

Ibrahimovic scored with his first chance of the game, heading in Brazil winger Lucas' cross from the right.

Things got worse for Toulouse when M'Bengue picked up a second booking in the 38th for fouling Lucas and was sent off.

Lucas set up PSG's third goal, running onto Lavezzi's clever back heel and clipping a superb pass over the defense to allow the unmarked Sakho to head home.

Ibrahimovic then bullied his way down the left of the penalty area and pulled the ball back for Dutchman van der Wiel to score his first goal for the club.

"They have great players and they take advantage of the slightest amount of space. When you go 2-0 down with 10 players it becomes even more difficult," Toulouse winger Franck Tabanou said. "They have a good enough squad to be champions. They may slip up once or twice before the end of the season but they're above everyone else."

Toulouse goalkeeper Ali Ahamada made several fine saves and showed great reflexes to tip over Ibrahimovic's lob and kick away winger Jeremy Menez's effort in the second half.

Meanwhile, PSG goalkeeper Salvatore Sirigu extended his unbeaten streak to a mammoth 868 minutes - PSG last conceded a league goal in the 2-1 loss away to Nice on Dec. 1.

"We should be really happy with how we played. We haven't lost for 10 games now and we're full of confidence, so I hope we can go all the way," PSG midfielder Blaise Matuidi said. "We were really united tonight and put in a lot of effort. We were really solid at the back tonight and when we're like that we're really strong."

Still, PSG left back Sylvain Armand warned his teammates not to get carried away.

"Every time we play well, we don't necessarily follow it up. I hope this continues in the coming weeks," Armand said. "The hardest thing in football is to carry on playing this way. I don't see anyone apart from Barcelona doing it, unfortunately we only do it sporadically."

Comments
Topics mentioned in this article
David Beckham Football Bayern Munchen Gregory Van der Wiel Zlatan Ibrahimovic Jeremy Menez Javier Pastore Moussa Sissoko Etienne Capoue
Get the latest updates on India vs Australia and check out  Schedule, Results and Live Score. Like us on Facebook or follow us on Twitter for more sports updates. You can also download the NDTV Cricket app for Android or iOS.