Perhaps we have more to give, says disappointed Sergio Ramos

Ramos is the third Madrid player to give a press conference in three days, after almost five months of players not speaking following their early training session, reports Xinhua. 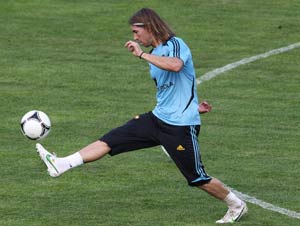 Real Madrid defender Sergio Ramos has admitted that he was disappointed at the way his side's season has developed and felt that the whole football club had more to give.

Ramos is the third Madrid player to give a press conference in three days, after almost five months of players not speaking following their early training session, reports Xinhua.

He was asked Thursday about the club's current position, 16 points behind FC Barcelona in the Primera Liga, as well as other issues such as the decision to leave captain Iker Casillas on the substitution bench for the last game of 2012, which saw Madrid lose 2-3 in Malaga.

"I think that if you were to ask any Real Madrid member, they would say we were obliged to fight for every title," admitted Ramos. "It's true that the league is difficult, but it is not impossible for us. While there is a lot of affection for the Champions League and we will try and win it to give them reasons to be happy."

Real Madrid have largely been disappointing since winning last season's league title in Spain, but Ramos said nerves were not a problem.

"I don't think it is that," he said. "You have good and bad runs in football and maybe things have not worked as we would have wanted in recent games. We have not been as effective in front of goal as last season, but maybe the holidays will have helped us to reflect."

"We all have to demand more of ourselves and I am the first who needs to do that, because maybe we can all give a bit more, but we are on track and we have always had a good attitude," insisted the defender, who added that things had not changed much between this season and last.

Ramos was also asked about Iker Casillas' relegation to the bench in the defeat to Malaga, a move which surprised almost everyone in Spain and which even led to Barca keeper Victor Valdes to wish Casillas all the best for the future.

Ramos also said there was no division of opinion in the dressing room over Casillas and added the club was as motivated as ever before lamenting the ankle injury which will keep his usual defensive partner, Pepe sidelined for a month.

Comments
Topics mentioned in this article
Football Real Madrid John Terry
Get the latest updates on ICC T20 Worldcup 2022 and CWG 2022 check out the Schedule, Live Score and Medals Tally. Like us on Facebook or follow us on Twitter for more sports updates. You can also download the NDTV Cricket app for Android or iOS.