Pedro Rodriguez produced a goal and an assist on his debut as Chelsea defeated West Bromwich Albion 3-2. 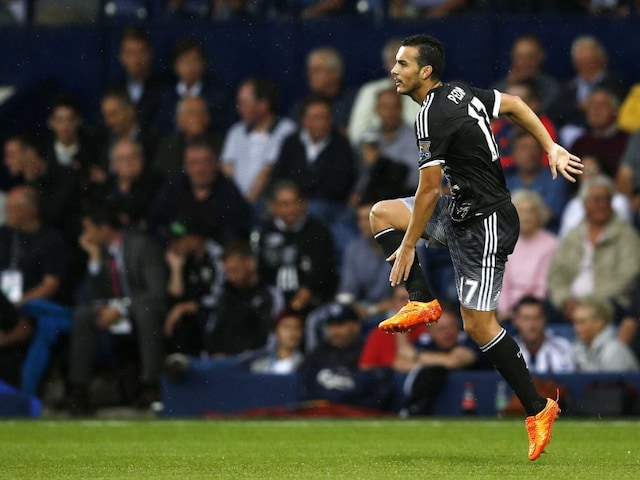 Pedro scored on his Chelsea debut as they won 3-2 against West Brom.© AFP

Pedro Rodriguez produced a goal and an assist on his debut as Chelsea survived the dismissal of captain John Terry to prevail 3-2 at West Bromwich Albion on Sunday. (Pedro Says Mourinho Big Factor in Joining Chelsea)

A USD 33.2 million signing from Barcelona earlier this week, reportedly snatched from beneath Manchester United's noses, Pedro scored and set up Diego Costa as Jose Mourinho's side went 2-0 up. (Louis Van Gaal Bullish Despite Pedro Snub)

Having earlier missed a penalty, James Morrison scored twice in response for West Brom, but despite Terry's red card for a last-man foul, Cesar Azpilicueta's first league goal proved enough to give Chelsea a first victory of the Premier League season.

It was Chelsea's first win at West Brom in five attempts and saw the defending champions belatedly find their gear after a 2-2 draw with Swansea City and last weekend's chastening 3-0 loss at Manchester City.

On a dark, squally afternoon in the West Midlands, Morrison squandered an early chance to put the hosts ahead when his penalty was blocked by Thibaut Courtois -- back in the Chelsea goal following suspension -- after Nemanja Matic had tripped Callum McManaman.

Fifteen minutes later, Pedro announced his arrival in English football by darting infield from the right, exchanging passes with Eden Hazard and finding the bottom-right corner with the aid of a deflection.

Chelsea's fans launched into a chorus of "Are you watching Manchester?" and United's supporters will have found themselves looking away again 10 minutes later when Pedro's cross-shot was turned in by Costa.

Morrison reduced the arrears by bludgeoning home when Salomon Rondon hooked James McClean's cross back into the box, only for Azpilicueta to restore the visitors' two-goal cushion in the 42nd minute by rolling in a shot after Costa had chested down Cesc Fabregas's pass.

Terry saw red nine minutes into the second half for impeding Rondon as he bore down on goal before Morrison reduced the arrears with a glancing header, but Chelsea held out, Courtois thwarting Rondon in added time.

Manchester City will replace Leicester City at the top of the table if they avoid defeat at Everton later on Sunday, while Southampton go in search of a first win of the campaign at promoted Watford.

Comments
Topics mentioned in this article
Chelsea Pedro Football
Get the latest Cricket news, check out the India cricket schedule, Cricket live score . Like us on Facebook or follow us on Twitter for more sports updates. You can also download the NDTV Cricket app for Android or iOS.