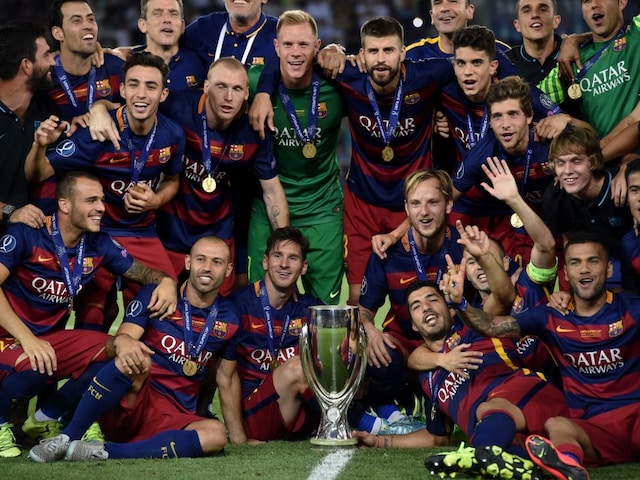 Barcelona added the UEFA Super Cup to their treble win of trophies last season despite blowing a 4-1 lead with a stunning 5-4 win over Sevilla thanks to Pedro Rodriguez's extra time winner. (Messi Says he May Become a Midfielder)

Two magnificent free-kicks from Lionel Messi plus goals from Rafinha and Luis Suarez looked to have Barca well on course to claim their fourth trophy of the year after Ever Banega had given Sevilla a shock early lead.

However, Jose Antonio Reyes reduced the arrears before a Kevin Gameiro penalty and a debut strike from Yevhen Konoplyanka forced the game into an extra 30 minutes.

Barca weren't to be denied, though, and, in what could be his last game for the club, Pedro pounced on the rebound after Beto had denied Messi his hat-trick. (Ronaldo, Ramos Join Real Madrid Practice)

Pedro had been controversially left out of the starting line-up despite the absence of Neymar due to the mumps as he appears set for a move to Manchester United after Barca technical secretary Robert Fernandez admitted he has asked to leave the club.

"He deserves it," Messi said of Pedro's match-winning contribution.

"The players and the club don't know what he is going to do. It is his decision, but whatever he does we wish him the best."

Sevilla made the brighter start and Javier Mascherano was lucky to avoid further punishment after being adjudged to have brought down Reyes on the edge of the area.

The punishment was still to come for the European champions, though, as Banega clinically curled the resulting free-kick past the helpless Marc-Andre Ter Stegen with an effort his international teammate Messi would have been proud of.

Unfortunately, for Unai Emery's men the lead lasted only four minutes as Suarez was blocked by Grzegorz Krychowiak and Messi delicately chipped the ball over the wall into the top corner.

The four-time World Player of the Year's next set-piece was even more spectacular as he this time fired a free-kick in off the inside of the post to move level with Cristiano Ronaldo as the all-time leading scorer in European competitions with 80.

Suarez passed up a huge chance for the third when he fired straight at Beto two minutes before half-time but made immediate amends by collecting the rebound to tee up Rafinha to slot home.

Sevilla's hopes of a comeback appeared to be over when a shocking pass from Benoit Tremoulinas was intercepted by Sergio Busquets and turned home by Suarez.

Yet, they were given a lifeline when Reyes turned home Vitolo's excellent cross at the far post to reduce the arrears.

Jeremy Mathieu then pulled down Vitolo inside the area and was also lucky only to see a yellow card before Gameiro fired home the spot-kick.

And a remarkable comeback was complete when two substitutes on their debut combined for the equaliser as Konoplyanka tapped home Ciro Immobile's low cross.

Pedro was finally introduced three minutes into extra time and just as in the Super Cup six years ago against Shakhtar Donetsk he grabbed the winner by firing into the roof of the net after Beto had parried Messi's follow-up effort from another dangerous free-kick.

Sevilla still had two great chances to force an incredible match into a penalty shootout but both Coke and Adil Rami fired off target as a relieved Barca hung on.

Comments
Topics mentioned in this article
Barcelona Sevilla Pedro Lionel Messi Football
Get the latest Cricket news, check out the India cricket schedule, Cricket live score . Like us on Facebook or follow us on Twitter for more sports updates. You can also download the NDTV Cricket app for Android or iOS.