Paris Saint Germain triumph in Zagreb for rare away win 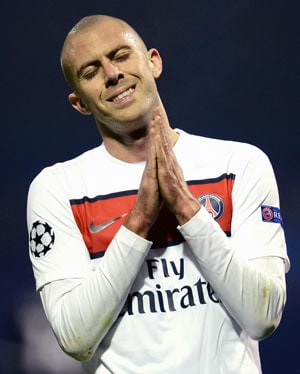 Goals from Zlatan Ibrahimovic and Jeremy Menez propelled Carlo Ancelotti's side past their overmatched Croatian opponents, as PSG made it two wins from three to stay within touching distance of group leaders Porto and consign Dinamo to a ninth consecutive Champions League group stage defeat.

Victory for the Parisians moved them into sole possession of second place on six points, three adrift of Porto with Dynamo Kiev third on three points and Zagreb propping up the standings, having yet to open their account.

Despite a promising start Ancelotti acknowledged there is still plenty of work to be done if they are to advance to the knockout stages.

"Our position in the group is good. There are three matches left but at the Parc (des Princes) we will have the possbility to get to nine points, which would be very good before playing Kiev and Porto. That would give us a very good possibility (of advancing)," said the Italian.

With Nene and Mamadou Sakho added to a mounting list of absentees following Saturday's 1-0 over Reims, Ancelotti opted to restore Menez and Javier Pastore to the starting XI, while Mathieu Bodmer returned to the line-up after a month out with an ankle problem.

Dinamo coach Ante Cacic, who was without the services of Arijan Ademi after the midfielder sustained a toe injury at the weekend, had labelled Ibrahimovic as one of the "best four players in the world" ahead of the clash.

The big Swede soon made his presence felt as he forced goalkeeper Ivan Kelava into a fine block after just two minutes.

The Dinamo captain was again called into action soon after, denying Ibrahimovic for a second time as he palmed away his fizzing effort.

The hosts, meanwhile, were largely restricted to speculative strikes from outside the box in the opening period, although Salvatore Sirigu was forced to tip over Sammir's corner from under his own crossbar.

Menez then forced a good low save from Kelava before Ibrahimovic was again guilty of spurning another golden opportunity.

The Swede exchanged a series of intricate passes with Marco Verratti on the edge of the Dinamo box but having timed his run to perfection and with just the goalkeeper to beat he miscued badly, sending the ball high and wide of the target.

The home side's vulnerability in defence was clearly evident though and they were eventually punished as Menez escaped down the left, getting behind Ante Puljic before cutting the ball back to Ibrahimovic who coolly slotted beyond Kelava.

Menez then embarked on a solo effort to double PSG's lead as the visitors hit Dinamo on the counterattack.

Pastore slipped the ball to the France international who again ran at Puljic before drilling low through the legs of Kelava two mintues before half-time.

Ancelotti was quick to praise the enigmatic Pastore, while demanding more of the same from the mercurial Menez.

"After a poor performance against Marseille, Pastore played well. He played simply and with consistency," said Ancelotti.

As for Menez, the Italian added: "(He) was very happy with his assist and his goal. I ask him to do more because he has extraordinary capacities. I hope he will play even better."

Last time Dinamo played French opposition -- a 7-1 hammering at home to Lyon a year ago -- the Croatian champions completely unraveled in a second half that saw them concede six goals.

There was to be no repeat of such farcical events this time although Ibrahimovic should have added to his haul when he placed an attempted lob wide of the mark after incisive play from Pastore.

Thiago Silva saw his downward header from a Pastore corner deflected onto the bar by Marcelo Brozovic, while Guillaume Hoarau had a late strike ruled out for a foul on Sime Vrsaljko, but it had little bearing on the final result as PSG clinched a well-deserved victory for just their second away win in the competition in 16 attempts.

Comments
Topics mentioned in this article
Football Jeremy Menez Dinamo Zagreb Paris SG Zlatan Ibrahimovic
Get the latest updates on India vs England Series, India vs England , live score and IPL 2021 Auction . Like us on Facebook or follow us on Twitter for more sports updates. You can also download the NDTV Cricket app for Android or iOS.