Palermo draw 1-1 against Bologna in Serie A

Palermo almost restored their lead three minutes from halftime when Miccoli curled a right-footed shot that hit the post. 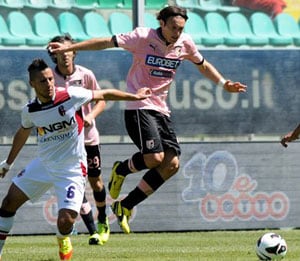 Relegation-threatened Palermo drew 1-1 at home with Bologna in Serie A on Sunday after being let down by a goalkeeping error.

Two straight wins previously gave Palermo hope of achieving safety, and it made the perfect start when Josip Ilicic fired into the net following a one-two with Fabrizio Miccoli.

However, Bologna leveled following a moment of madness from Parma goalkeeper Stefano Sorrentino.

Sorrentino went to collect Michel Morganella's backpass but appeared to only then remember he could not touch it with his hands. The ball rolled under his body, allowing Manolo Gabbiadini to round Sorrentino and slot into an empty net.

Palermo almost restored its lead three minutes from halftime when Miccoli curled a right-footed shot that hit the post.

The Sicilian side is two points from safety.

Comments
Topics mentioned in this article
Football Bologna AC Milan
Get the latest updates on IPL 2020, check out the IPL Schedule for 2020 and Indian Premier League (IPL) Cricket live score . Like us on Facebook or follow us on Twitter for more sports updates. You can also download the NDTV Cricket app for Android or iOS.