Vilanova did accept though that Bayern's physical dominance throughout the two ties had been key and that how Barca prepare physically for the latter stages of the season is something they need to improve on after also running out of steam against Chelsea in last season's Champions League semi-finals. 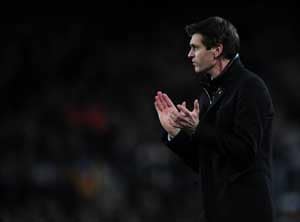 Barcelona coach Tito Vilanova has repeated his belief that the Catalans do not need to make wholesale changes to their squad at the end of the season despite suffering their worst ever European defeat to Bayern Munich in the Champions League semi-final.

The Germans' 7-0 aggregate win has led many to believe that, after a phenomenally successful period over the last five years, Barca are coming towards the end of an era and need to bring in a number of new faces when the transfer market reopens at the end of the campaign.

However, with Barca still set to clinch their fourth league title in five years, Vilanova maintains that finding players that will fit into Barca's current style of play is the priority.

"The team doesn't need a lot of changes," he told a press conference on Saturday.

"The Dream Team (the Barca team of the early 90s) also won the league and lost the European Cup final against a Milan team that was in top form. We need to think about things very hard. The team will be reinforced, as was planned.

"It will be difficult to find players that are able to play in the Barcelona system and we want to continue playing in the same way."

Vilanova did accept though that Bayern's physical dominance throughout the two ties had been key and that how Barca prepare physically for the latter stages of the season is something they need to improve on after also running out of steam against Chelsea in last season's Champions League semi-finals.

"Last year we also arrived more worn down. There is a part that you cannot control which is injuries.

"We need to look at how we get there. This year there were fewer muscular injuries than in previous years. We suffered more with breaks and joint injuries."

The most striking image of Barca's wear and tear throughout the season was Lionel Messi's presence on the bench for the second leg of the Bayern tie on Wednesday night due to the recurrence of a hamstring injury suffered early last month.

However the Argentine trained on Saturday, along with Sergio Busquets, who also missed the game on Wednesday, and both are in contention to face Real Betis on Sunday night.

"We will see how they train tomorrow and how the doctors evaluate them," added Vilanova.

"In these years Leo has had very few injuries and he is a player who feels comfortable when he is playing."

Comments
Topics mentioned in this article
Football Real Madrid Barcelona Lionel Messi
Get the latest updates on ICC T20 Worldcup 2022 and CWG 2022 check out the Schedule, Live Score and Medals Tally. Like us on Facebook or follow us on Twitter for more sports updates. You can also download the NDTV Cricket app for Android or iOS.