No apology from New Zealand PM over David Beckham 'jibe' 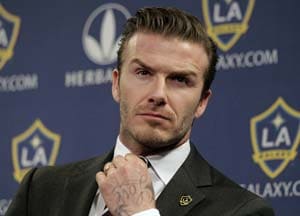 Key made the alleged remark on Friday when telling school students in Dunedin about time he and his son had spent with the LA Galaxy player in 2008, Radio New Zealand reported.

The national broadcaster said Key described Beckham as handsome and "a really nice guy" but "thick".

Key refused to confirm or deny making the comment Monday and told talkback radio he did not owe anyone an apology, suggesting the conversation may have been misheard.

"That is someone that thinks they've overheard a conversation I've had," he told Newstalk ZB.

"It was a private conversation. I was talking to a few people and that's what he (the reporter) thought he heard."

Beckham visited New Zealand in 2008 for an exhibition match between the LA Galaxy and the Oceania All-Stars in Auckland.

Comments
Topics mentioned in this article
Football Pakistan Cricket Team New Zealand Cricket Team
Get the latest Cricket news, check out the India cricket schedule, Cricket live score . Like us on Facebook or follow us on Twitter for more sports updates. You can also download the NDTV Cricket app for Android or iOS.