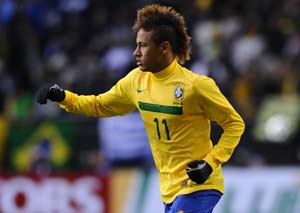 The 20-year-old beat Corinthians striker Paolo Guerrero, who scored the winning goal in the World Club Cup final against Chelsea, and compatriot Lucas Moura to the prize, reports Xinhua.

Neymar received 199 votes from sports journalists across Uruguay, giving him the award by some distance. Guerrero came in second with 50 votes.

The Santos striker continues to attract interest from the world's biggest clubs but has insisted that he will stay at his boyhood club until after the World Cup in 2014.

According to reports in the Brazilian press he could be ready to return, however, with Paulista club Palmeiras reportedly ready to offer the player a short-term deal.

Comments
Topics mentioned in this article
Football Hamburger SV Uruguay Venezuela Brazil Chile Peru Paolo Guerrero Neymar
Get the latest updates on IND vs NZ 2021, check out the Schedule and Live Score . Like us on Facebook or follow us on Twitter for more sports updates. You can also download the NDTV Cricket app for Android or iOS.