Barca will now face Getafe in the last 16 after the Madrid side thrashed Girona 4-1 to secure their place in the next round by the same score on aggregate. 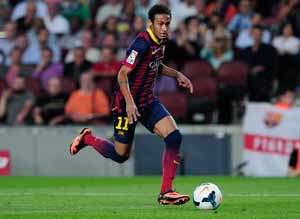 La Liga leaders Barcelona comfortably secured their place in the last 16 of the Copa del Rey with a 3-0 win over third-tier Cartagena on Tuesday, to seal a 7-1 win on aggregate.

Cartagena threatened to embarrass their illustrious hosts when Zurdo struck the post midway through the first-half. However, any hopes the visitors had of a famous victory were quashed when Pedro neatly swept home Martin Montoya's cross for his third goal of the tie.

Without a host of regular starters, Barca struggled to create clear-cut openings all evening but they were gifted a second goal 23 minutes from time when Mariano Martinez turned Cristian Tello's cross into his own net.

And Neymar rounded off the scoring with his sixth goal in his last three games when he headed home Andres Iniesta's cross three minutes from time. Barca will now face Getafe in the last 16 after the Madrid side thrashed Girona 4-1 to secure their place in the next round by the same score on aggregate.

Osasuna, fresh from their 2-2 draw against Real Madrid on Saturday, will face Los Blancos again in January should Madrid overcome Olimpic Xativa on Wednesday as the Navarrans progressed on away goals after a 1-1 draw at home to Malaga on Tuesday. Meanwhile, Levante beat second division Recreativo Huelva 4-0 to also progress 4-1 on aggregate.

Comments
Topics mentioned in this article
Football Pedro Lionel Messi Cesc Fabregas Uruguay Barcelona Rayo Vallecano Real Madrid Brazil
Get the latest Cricket news, check out the India cricket schedule, Cricket live score . Like us on Facebook or follow us on Twitter for more sports updates. You can also download the NDTV Cricket app for Android or iOS.