Lionel Messi was once again FC Barcelona's inspiration as he brilliantly picked out Munir El Haddadi to open the scoring before the youngster tapped home his second against Espanyol. Barcelona won 2-0 as they advanced to the Copa del Rey quarter-finals 6-1 on aggregate. 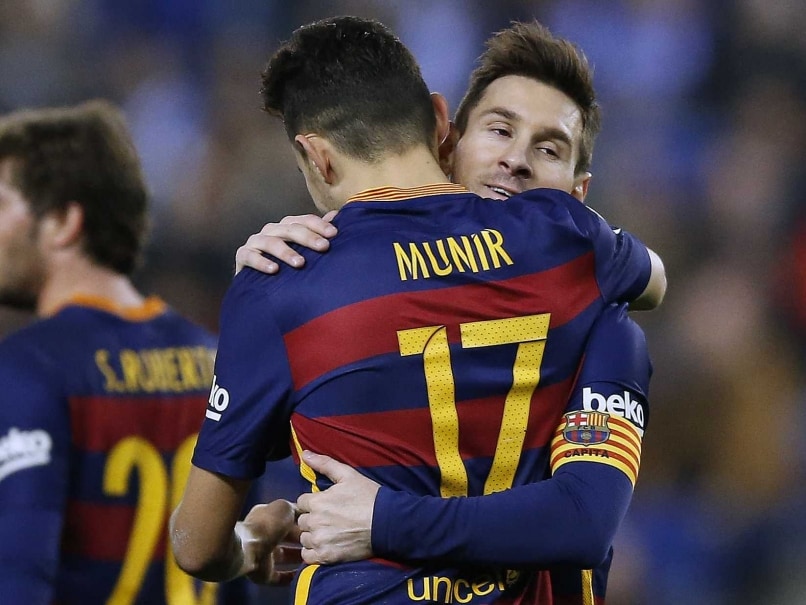 Barcelona ended a three-game series of bad-tempered derbies against Espanyol on top by sealing their place in the Copa del Rey quarter-finals 6-1 on aggregate courtesy of a 2-0 win at Cornella-El Prat on Wednesday.

Fresh from picking up his record fifth Ballon d'Or, Lionel Messi was once again Barca's inspiration as he brilliantly picked out Munir El Haddadi to open the scoring before the youngster tapped home his second of the night late on.

There was less aggression on the field than in the previous two meetings between the sides in the past 10 days, however Espanyol could be punished for offensive banners towards Colombian popstar Shakira - the partner of Barca defender Gerard Pique - and Luis Suarez. (Barca to Appeal Suarez Suspension)

Athletic Bilbao, Celta Vigo and Las Palmas also booked their place in the last eight to join Sevilla and Mirandes, who qualified on Tuesday, for Friday's quarter-final draw.

La Liga leaders Atletico Madrid host Rayo Vallecano on Thursday tied at 1-1, whilst Gary Neville's Valencia have one foot in the quarters as they lead Granada 4-0.

"Today everything was a lot calmer, partly because of the result," said Barca boss Luis Enrique.

"The only game that got out of hand was the first, but I am not the one to analyse it. The second had what a derby should have and in the third it was harder for them to press us.

"When one side plays to an elevated level it eventually wears them down."

Suarez was banned for confronting Espanyol players in the tunnel after last week's first-leg in which the visitors had two men sent-off.

Enrique also handed Neymar, Pique, Sergio Busquets and Andres Iniesta a rest, but Messi captained the side just two days after regaining his title of World Player of the Year. (Neymar Ordered to Appear in Court Over Transfer From Santos)

Francesco Bardi produced a brilliant save to prevent the Argentine opening the scoring with a fierce volley on 11 minutes.

However, the Espanyol 'keeper was left helpless when El Haddadi galloped onto Messi's inch-perfect through ball to round Bardi before slotting into an empty net.

Alvaro Gonzalez unceremoniously chopped down Messi and Felipe Caicedo charged into Marc-Andre ter Stegen as the game threatened to boil over.

Yet, Ter Stegen had his revenge as he stood up well to turn Caicedo's chipped effort over moments later.

With the tie clearly headed in Barca's favour, the second-half was largely a non-event, but the European champions did add a second two minutes from time when Aleix Vidal squared for El Haddadi to tap home.

Last season's finalists Athletic Bilbao completed a 4-2 aggregate victory over Villarreal thanks to Inaki Williams's neat turn and finish to claim a 1-0 win on the night at El Madrigal.

Celta Vigo shrugged off their poor La Liga form of late to end Cadiz's Cup reprieve after they advanced to the last-16 due to Real Madrid's expulsion from the competition for fielding an ineligible player.

John Guidetti's third goal of the tie and Dejan Drazic's late strike sealed a 2-0 win to progress 5-0 on aggregate.

And Las Palmas edged a goalfest against Eibar 6-4 on aggregate thanks to their second 3-2 win of the tie.

Comments
Topics mentioned in this article
Barcelona Espanyol Football
Get the latest updates on ICC Women's Cricket World Cup 2022 and IPL 2022, check out the Schedule , Live Score and IPL Points Table. Like us on Facebook or follow us on Twitter for more sports updates. You can also download the NDTV Cricket app for Android or iOS.