Zlatan Ibrahimovic volleyed PSG into an early lead in the French capital, but Monaco's 60-million-euro striker Radamel Falcao bundled in an equaliser. 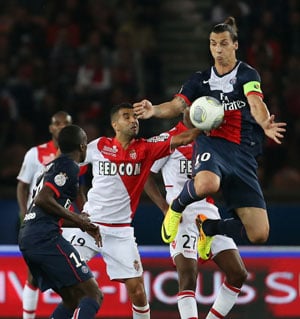 Monaco came from behind to earn a 1-1 draw with defending French champions Paris Saint-Germain on Sunday to keep hold of top spot in Ligue 1.

Zlatan Ibrahimovic volleyed PSG into an early lead in the French capital, but Monaco's 60-million-euro striker Radamel Falcao bundled in an equaliser for the visitors as the first clash between the league's two financial heavyweights finished level.

The draw kept Monaco in first place on 14 points, two ahead of PSG, who moved into second, ahead of Saint-Etienne on goal difference.

"It was a good match. Paris played well but so did we," said Monaco boss Claudio Ranieri.

"We tried to win right up until the end and I'm very satisfied. I have no regrets.

"I know that Paris have a lot of quality and more experience than our players, so I'm happy," the Italian continued.

PSG coach Laurent Blanc made one change to the side that beat Olympiakos 4-1 midweek in the Champions League with Argentine winger Ezequiel Lavezzi replacing Lucas Moura on the left side of an attacking trio.

Ibrahimovic had endured a slow start to the season with just one goal prior to Sunday, but last year's leading scorer made an immediate impact at the Parc des Princes as he gave PSG a fifth-minute lead.

Thiago Silva's raking downfield ball picked out the run of left-back Maxwell who crossed for Ibrahimovic to volley past Danijel Subasic from close range.

The hosts were dealt a blow on the quarter-hour, though, as Silva limped off with a hamstring injury to be replaced by Zoumana Camara.

Falcao then hauled Monaco level on 20 minutes as he threw himself at Joao Moutinho's teasing cross into the box, the Colombian bravely putting his body on the line to head beyond Salvatore Sirigu.

Monaco's Yannick Ferreira Carrasco fired just over on the volley shortly after, while Edinson Cavani dragged a shot wide of the far post after clever interplay between himself and Ibrahimovic.

The Swede then wasted a glorious chance to add to his tally and restore PSG's advantage as he headed over after being left completely unmarked as Lavezzi swung in a dangerous free-kick.

And Ibrahimovic was again guilty of botching another opening just moments later.

Played through by Marco Verratti, the striker elected to cut back onto his right foot and, rather than shooting, over hit a chip towards the far post as he tried to pick out an advancing Lavezzi.

There was further frustration for Ibrahimovic after the interval as he flicked a low cross from Lavezzi the wrong side of the post.

Ferreira Carrasco volleyed wide when well placed, while substitute James Rodriguez and Layvin Kurzawa took turns to test Sirigu from distance but the contest began to peter out as the second half wore on.

The Uruguayan was firstly denied by a fantastic sliding intervention from Andrea Raggi after he chested down Blaise Matuidi's lofted pass and shot on the turn before he sent a header narrowly wide of the near post as Monaco withstood a late threat.

"We played a very good match, unfortunately we weren't able to get that decisive goal," said PSG midfielder Blaise Matuidi.

"We put them in difficulty, we had the chances but we failed to take them. We can be happy with the performance we produced, (it was) one of the best of the season."

Earlier, Lyon halted a run of six matches without a victory as they beat promoted Nantes 3-1.

Nice climbed to fifth after thumping lowly Valenciennes 4-0 to mark the inauguration of their new Allianz Riviera stadium in style, while Lorient fought back from two goals down at home to draw 3-3 with Bordeaux.

Comments
Topics mentioned in this article
Football Zlatan Ibrahimovic Paris SG Bayern Munchen
Get the latest updates on ICC T20 Worldcup 2022, check out the Schedule and Live Score. Like us on Facebook or follow us on Twitter for more sports updates. You can also download the NDTV Cricket app for Android or iOS.