FC Barcelona slipped to second place in La Liga after their goalless draw at Sevilla. 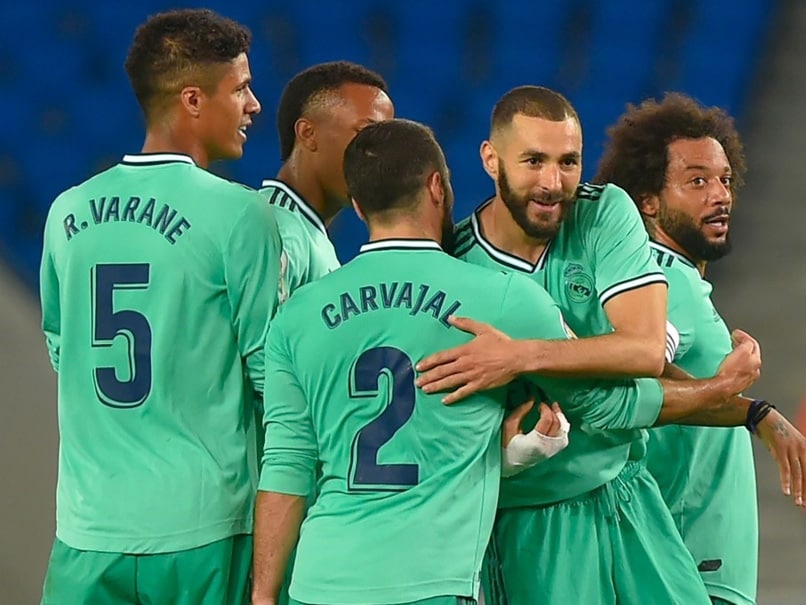 Real Madrid have won both their matches since La Liga resumed.© AFP

Real Madrid and Barcelona may be neck-and-neck on points at the top of La Liga but the pendulum has swung back in Madrid's favour. Kind fixtures allowed Spain's top two to ease into the resumption of Europe's closest title race but a testing few days has delivered a more accurate gauge of form and fitness. Barca stumbled at Sevilla on Friday night, a goalless draw at the Ramon Sanchez Pizjuan coming between impressive Madrid victories, 3-0 at home to Valencia and then 2-1 away at Real Sociedad on Sunday.

A despondent Gerard Pique said Madrid might even prove uncatchable, an assessment many believed to have been more of a jibe at referees than a compliment to his rivals.

Madrid had certainly benefited from Rodrigo Moreno's goal for Valencia being ruled out the night before and would see three tight decisions go their way against Real Sociedad too.

But they were able to use a superior head-to-head record to return to the top of La Liga because Barcelona handed them an opportunity, which they took.

Setien's side became laboured against Sevilla and, in truth, never really made them feel uncomfortable. Neither team created enough to deserve to win the game and with Lionel Messi quiet in his third 90 minutes in nine days, Barca lacked ideas and inspiration.

"We will keep going and will try to maintain that hope because we are convinced we can still win the league," said Setien on Monday.

Of the tight battle with Madrid, he added: "Everything that can be said about us applies to them too. They can't make any mistakes either. We have seen many leagues decided on the last day before."

On Tuesday, Barcelona host Athletic Bilbao, who are undefeated since the restart, before travelling to Celta Vigo next weekend for a match that looked simpler before Celta trounced Alaves 6-0 on Sunday.

Then Barca have Atletico Madrid at home and Villarreal away, two resurgent teams, both in the hunt for the top four, before a kinder finish kicks in.

Yet they cannot afford to give Real Madrid a lead to cling onto, meaning Setien needs to find solutions despite the lack of time for training.

Antoine Griezmann has looked lost, the Frenchman giving way to Martin Braithwaite against Sevilla, in what appeared to be Setien's favoured line-up.

Frenkie de Jong is expected to miss most of the upcoming difficult period with a calf injury.

But Madrid have problems too after Sergio Ramos went off with an injured left knee against Real Sociedad while Casemiro will be suspended against Mallorca on Wednesday.

Madrid should survive against Mallorca but any extended absence for Ramos will destabilise a defence that has been the foundation of the team's success.

"He's the best defender in the world," said Zinedine Zidane on Sunday.

Eden Hazard sat out Sunday's match, perhaps rested or perhaps recovering from a knock he took to his troublesome ankle against Valencia.

This is also not the first time Madrid have appeared to snatch the momentum from Barcelona.

In March, they convincingly won the Clasico at the Santiago Bernabeu only to undo their efforts by losing to Betis the following week.

They have Karim Benzema, who looks to be in the form of his life after scoring three goals in as many games, including his sensational volley against Valencia.

And they have Hazard, whose partnership with Benzema looks like the first realistic answer to the attacking void left almost two years ago by the departure of Cristiano Ronaldo.

If Hazard can stay fit, it could prove a title-winning combination.

"We have achieved nothing yet," said Zidane on Sunday. "We've had three victories but we know the title race will go until the end. We have to keep going."