The last time Mohd Sporting won Durand Cup was before Independence in 1940 by defeating Warwickshire Regiment. On Thursday, they beat ONGC 2-1 in the final. 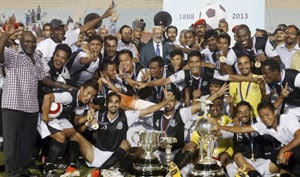 Kolkata giants Mohammedan Sporting on Thursday created history by winning the prestigious Durand Cup Football tournament after a gap of 73 years, defeating ONGC 2-1 in the final in New Delhi.

A half-fit Australian striker Tolgay Ozebey did the star turn for Mohammedan Sporting as he set up the first goal for Antony Soren (36th min) and then scored another with a brilliant long ranger in the 44th minute.

The century old Kolkata outfit was losing its significance in the context of Indian club football and this victory will mean a lot for its thousands of fans spread across the length and breadth of the country.

The last time Sporting won Durand Cup was before Independence in 1940 by defeating Warwickshire Regiment, and the last time they played a final in the capital was back in 1992.

Sporting coach Abdul Aziz had to field Tolgay as his best player Penn Orji was injured and the Aussie striker proved why he is so highly rated in Indian club circuit.

Credit should be given to stopper backs Sandeep Sangha and Luciano Sabrosa for defending doggedly. The Brazilian's right hand got dislocated and he will be doubtful for at least a month.

ONGC started attacking from the start but their striker Henry Ezeh's selfishness proved to be their undoing. Henry's propensity to hold on to the ball tad too long cost ONGC badly as the Nigerian, on a couple of occasions, didn't release the ball in time for a teammate who was in a better position to score a goal.

Mohammedan Sporting broke the deadlock in the 36th minute when Tolgay suddenly switched flanks and started operating from the wide left instead of the right wing.

The Aussie striker raced down the left wing and kept a pull-back for the onrushing Soren who managed to get a touch in the melee before it deflected off a ONGC defender's heel to find the net.

If Tolgay was instrumental in setting up the first goal, he did one better when his spectacular punch increased the lead for the black-and-white brigade.

In the 44th minute, receiving a ball just outside the 18-yard box, Tolgay kept a powerful angular punch which ONGC custodian Bilifang Narzary failed to save despite a full stretched dive.

ONGC scored a goal in the 56th minute against the run of play when they were awarded a direct free-kick outside the box.