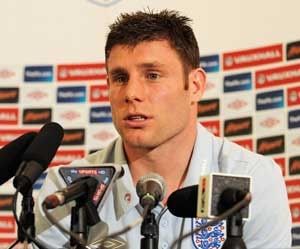 Terry won back the England captaincy on Tuesday, one year after being stripped of the armband by manager Fabio Capello following lurid newspaper allegations about his private life.

The clumsy handling of the announcement is understood to have angered injured captain Rio Ferdinand, who first learnt of Capello's desire to return the captaincy to Terry via newspaper reports.

However, Milner brushed off suggestions that the captaincy saga had had an adverse effect on England's preparations for Saturday's Euro 2012 qualifier against Wales in Cardiff.

"(It's) just business as usual, the manager's made the decision," Milner told a press conference.

"Everyone's happy for JT (Terry). It's obviously disappointing for Rio.

"We're fortunate to have a number of leaders in this squad," said Milner, describing Terry as a natural England captain.

"He puts his head in where a lot of people wouldn't. He leads off the field as well.

"The manager makes his decision and we stand behind them. JT is a leader, he might not have been captain over the last year but he's not changed the way he has been.

"The most important thing is leading on and off the field and as an England player he's been absolutely fantastic."

Meanwhile, Tottenham striker Peter Crouch said there were no problems within the squad over Terry's return as captain.

"There was a lot of talk about it. There are no problems with anyone," he said.

"There was a lot of talk over unrest, but it was not an issue at all. John Terry has always been fantastic on the pitch, has led Chelsea to doubles.

"He's a great leader on the pitch and will be again for England. The manager likes defenders to be the captain and John has done it for so long.

"He wears his heart on his sleeve and tries to bring out the best in all others around him, which is why he is such a leader. All the players are happy."

"It's a real shame for Rio," Crouch said. "He's a top-class player and a great lad and when he was here he was a great leader as well.

Comments
Topics mentioned in this article
Football James Milner England Cricket Team Australia Cricket Team West Indies Cricket Team John Terry
Get the latest updates on ICC T20 Worldcup 2022 and CWG 2022 check out the Schedule, Live Score and Medals Tally. Like us on Facebook or follow us on Twitter for more sports updates. You can also download the NDTV Cricket app for Android or iOS.