Crisis-hit Juventus host leaders AC Milan in the Italian league on Saturday knowing that they have no room for error as they bid to keep their hopes of European football alive next season. 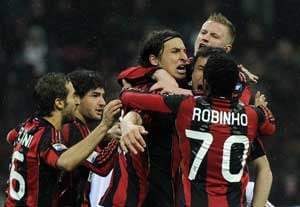 Crisis-hit Juventus host leaders AC Milan in the Italian league on Saturday knowing that they have no room for error as they bid to keep their hopes of European football alive next season.

AC Milan have a comfortable five-point cushion at the top of the league and have been boosted by striker Pato's improved form, but are expecting a backlash from Juventus who are struggling and want to make the most of their home advantage.

Milan, on 58 points, go into the match having brushed aside upstarts Napoli 3-0 in the crunch top of the table clash last weekend, leaving Inter Milan in second place five points off the pace and Napoli third a further point back.

Juventus are 17 points adrift of Milan, albeit in seventh place in the league.

But the Old Lady, as Juventus are known in Italy, can hope the visitors will have one eye on a trip to London midweek where they must overturn a first-leg 1-0 home defeat by Tottenham in the Champions League.

Juventus coach Luigi Delneri is fighting to keep his job with four defeats in the last six league games and has demanded a massive reaction from his players, as Brazil midfielder Felipe Melo warned his side have no room for error.

"AC Milan are an excellent team and any mistake you make against them can cost you dear," said Melo. "We have to play as well as we did the last time we faced them, and stay fully focused throughout.

"The fans aren't happy at the moment and that's understandable because losing two games against so-called 'small' teams is hard to digest.

"Now we have to repay them for the support they have given us."

"I wish Juventus had won their last two games. This atmosphere, the tension in the Bianconeri camp, will make it more difficult for us," he said.

Inter Milan President Massimo Moratti has jokingly declared himself a Juventus fan ahead of the game, his side are unbeaten in 2011, and are unlikely to stumble at home to Genoa on Sunday.

Winners of the last five Italian titles and current World Club Cup holders Inter have slowly but surely been creeping up on their city rivals and can close to two points this weekend if things go their way.

Napoli can lick their wounds from last weekend's defeat with the comforting thought of a visit from Brescia, while Lazio take on Palermo, who sacked coach Delio Rossi last week after a 7-0 home thrashing by Udinese.

New AS Roma coach Vicenzo Montella sees his side open the weekend action on Friday evening at Lecce before a Champions League match midweek at Shakhtar Donetsk (after a 3-2 defeat in the home leg) and then face a daunting derby against Lazio next weekend.