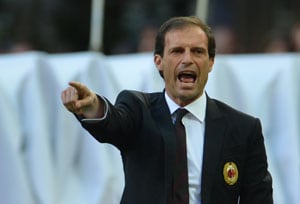 Allegri's job was again placed in doubt following the 1-3 home loss -- their sixth in 12 Serie A games, reports Xinhua.

"It is obvious that we are not happy," said Galliani on Monday. "We evaluated everything last night and changing the coach wouldn't have given us any guarantees.

"Silvio Berlusconi and I had a long talk last night and then we called Allegri at around midnight and told him that we have faith in him. We have confirmed Allegri as the coach of Milan. He has done well in the past two years and this is the decision we have made," he said.

Milan are in 13th place, just five points clear of the relegation zone and 12 points adrift of the Champions League spot.

Comments
Topics mentioned in this article
Football Javier Pastore AC Milan
Get the latest Cricket news, check out the India cricket schedule, Cricket live score . Like us on Facebook or follow us on Twitter for more sports updates. You can also download the NDTV Cricket app for Android or iOS.