"She Came From Such Humble Beginnings": Mary Kom Is A Big Source Of Inspiration, Says Bala Devi

Bala Devi was recently nominated for the AFC International Player of the Week alongside the likes of Sardar Azmoun, Son Heung-min and Saki Kumagai. She revealed that Mary Kom's humble beginnings inspire her. 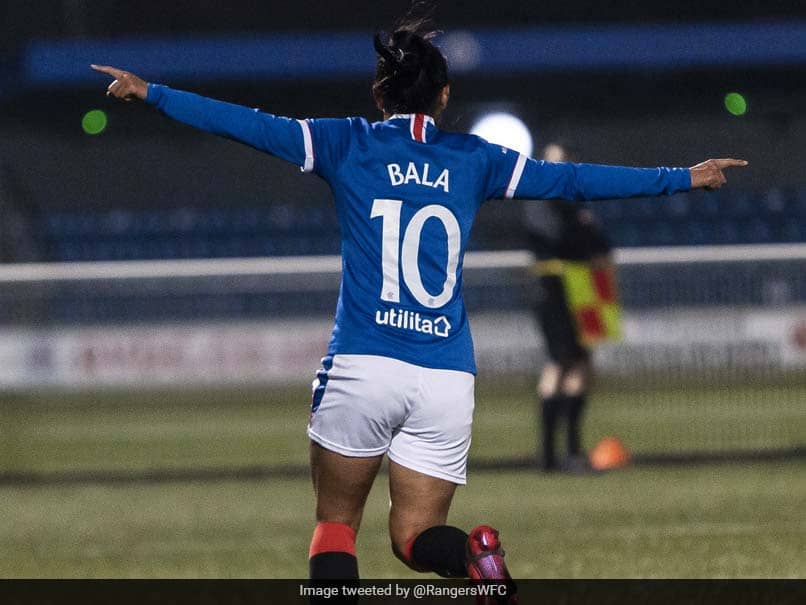 Bala Devi celebrates her goal for Rangers against Motherwell.© Twitter

National team striker Bala Devi, who recently became the first Indian woman to score a goal in Europe, idolises legendary boxer MC Mary Kom. Bala said she had met her biggest source of inspiration during the Asian Games in 2014 and termed record six-time World Champion and Olympic bronze medalist a friendly person. "Mary Kom is a big source of inspiration for me. She came from such humble beginnings and through her hard work, she broke so many records. Even after becoming a mother, she continues to break records and win laurels for the country," Bala told AIFF TV.

"We interacted at the Asian Games in 2014 and watched her train. She is a very friendly person and also supported us during our games," she added.

Earlier this year, the attacker signed for Scottish side Rangers Women FC and credited the "'international exposure" provided by the federation as a key factor as Indian football moves forward together.

"I have represented India a lot. In my mind, I always wanted to play at the international level and after the AIFF gave us so many international exposure tours, I gained a lot of experience of playing against European teams and I realized that I can play and compete with them," opined Bala.

"Then, I started seeking out teams and eventually chose to sign for Rangers as they are one of the best clubs in the world. I heard a lot about them and they also have a blue jersey like the Indian team," she added.

Bala made her debut for Rangers FC in the Scottish Women's Premier League in February, before the COVID-19 pandemic brought the world to a standstill.

With the competition having resumed since October, the mercurial forward created history as she scored her first competitive goal for the club on Sunday in a win against Motherwell.

"Ever since I gave my trials at this club, I wanted to inspire every Indian player back home. I have always stayed positive and have wanted to be an inspiration for all the girls and young players in India who want to play internationally. It is something that has always been on my mind and I take it into account every time I step on to the pitch," she said.

Subsequently, the striker was named as a nominee for the AFC International Player of the Week alongside star names such as Iran's Sardar Azmoun, Korea Republic's Son Heung-min, and Japanese icon Saki Kumagai.

"After the goal, a lot of people wished me, and many were talking and writing about it, which made me feel very proud," Bala said.

"After that, I was nominated for the AFC Player of the Week, and seeing my name on the list alongside such icons made me happy. I just want everyone to continue supporting us so we can keep achieving bigger things for the country in the future," she signed off.

India Football Mary Kom Boxing
Get the latest updates on IPL 2021, IPL Points Table , IPL Schedule 2021 , live score . Like us on Facebook or follow us on Twitter for more sports updates. You can also download the NDTV Cricket app for Android or iOS.