Despite several big-name summer signings, QPR go into the game at Loftus Road on the bottom of the Premier League table and without a win in 11 matches. 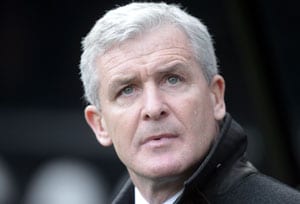 Embattled Queens Park Rangers manager Mark Hughes insisted that he is still the right man for the job on Friday and said his future will not be determined by Saturday's clash with Southampton.

Despite several big-name summer signings, QPR go into the game at Loftus Road on the bottom of the Premier League table and without a win in 11 matches.

Southampton, promoted from the second-tier Championship last season, have fared little better, and are second from bottom ahead of their trip north to London, one point above QPR.

With Saints coach Nigel Adkins also under pressure, Saturday's game has been described as a must-win match for both managers, but Hughes says he retains the full support of QPR's Malaysian owner, Tony Fernandes.

"My future doesn't hinge on this match," Hughes said on Friday.

"People shouldn't under-estimate the changes that have gone on at the club and I have been a big part of that.

"I have had great support from everyone. That doesn't just get swept aside because we are in a difficult situation.

"It is because of that work we have done before that sustains you and allows you time to get through this period.

"The club has moved forward in a massive way since I came in the door, through the work I and my staff have done.

"Everyone is pulling together to take this club forward."

Writing on Twitter earlier this week, Fernandes described the fixture as one that QPR "must win", but Hughes said that did not mean he was under pressure from his boss.

"I don't think it has been reported in the right context," said the Welshman, who kept QPR in the top flight on the final day of last season.

"I don't think he was saying it is a must-win game."

Comments
Topics mentioned in this article
Football Queens Park Rangers Mark Hughes
Get the latest Cricket news, check out the India cricket schedule, Cricket live score . Like us on Facebook or follow us on Twitter for more sports updates. You can also download the NDTV Cricket app for Android or iOS.