Despite a torrid start to the season, in which they lost five of their opening eight league games, Milan now occupy a Champions League qualification spot and lead Spanish giants Barcelona 2-0 ahead of their last 16, second leg clash in that competition at the Camp Nou next week. 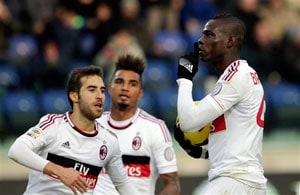 Mario Balotelli grabbed the headlines again as 10-man AC Milan consolidated their grip on third place in Serie A with a 2-0 win Friday at lowly Genoa which extended their unbeaten league run to 10 games.

Balotelli, who started on the bench, scored the clinching second after his replacement, Giampaolo Pazzini, had notched the opener.

But the result was marred by an ugly second half incident as Guinea full-back Kevin Constant was sent-off for a sustained attempt to confront Genoa's Cesare Bovo 25 minutes from time.

Despite receiving first a second yellow from the referee, and eventually the subsequent red, Constant refused to leave the field as he persistently attempted to approach Bovo.

It was several minutes before a gaggle of teammates managed to usher him from the pitch.

But that did not stop Milan from continuing their recent unbeaten run which has taken them to within two points of second-placed Napoli ahead of the weekend games.

Despite a torrid start to the season, in which they lost five of their opening eight league games, Milan now occupy a Champions League qualification spot and lead Spanish giants Barcelona 2-0 ahead of their last 16, second leg clash in that competition at the Camp Nou next week.

"It's a great win in the chase for third place," said Milan coach Massimiliano Allegri.

"Now we're going to turn our attentions to Barcelona and prepare for that match as well as we can.

"I'm sorry about Constant's sending off, there wasn't much risk and we could have clinched that result without wasting too much energy," he told Sky Sport.

"We could have saved ourselves, you have to stay calm."

In a turgid first period chances were at a premium but teenage French forward M'Baye Niang brought a fine save out of his compatriot and home goalkeeper Sebastien Frey on 20 minutes with a powerful effort.

He'd been limping around the pitch and indicating to his bench that he wanted to come off following a robust challenge from Daniele Portanova, when a Mattia De Sciglio cross from the right was pushed out into his path on the edge of the box and the Italy striker forgot his injury for an instant to crash a rising shot in off the underside of the bar.

Moments later he did indeed limp off to be replaced by Balotelli, whose first act was to earn a booking when exacting revenge on Pazzini's assailant.

Genoa thought they had a shout for a penalty late in the first period when they claimed a handball against Niang but the referee remained unmoved.

The hosts came their closest yet soon after the restart as Bovo bent a wicked free-kick beyond Milan goalkeeper Christian Abbiati, only to see it crash back off the upright.

They paid for that on the hour mark as Balotelli pounced on a scuffed shot from Christian Zapata to shoot across Frey and double the visitors' lead.

Despite playing the last 25 minutes with a man advantage, fourth-from-bottom Genoa could make no headway.

Comments
Topics mentioned in this article
Football AC Milan Mario Balotelli Giampaolo Pazzini
Get the latest updates on India vs Australia Series, check out the India vs Australia Schedule for 2020-21 and Ind vs Aus live score . Like us on Facebook or follow us on Twitter for more sports updates. You can also download the NDTV Cricket app for Android or iOS.