Goals from David Silva and Sergio Aguero helped Manchester City beat Middlesbrough 2-0 and enter the semi-finals of the FA Cup on Saturday. 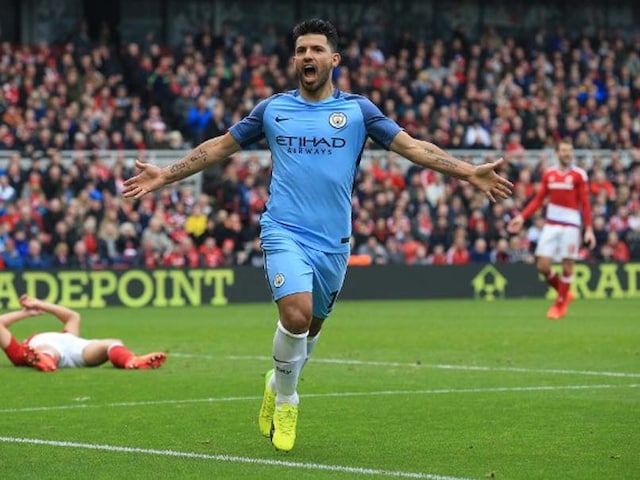 Goals from David Silva and Sergio Aguero helped Manchester City defeat Middlesbrough 2-0 to enter the semi-finals of the FA Cup at the Riverside Stadium on Saturday. City cruised into the last four as Pep Guardiola showed he is taking the competition seriously. Goals from Silva and Aguero were scant reward for City as they easily out-classed Middlesbrough, who must have feared such an outcome when they witnessed the team named by Guardiola.

Ominously for Middlesbrough, currently languishing in the relegation zone after failing to win any of their last 10 Premier League games, all City's world-class players were involved, despite the fact they face Monaco in a decisive Champions League last 16 second leg on Wednesday.

City's extra class soon surfaced as three of Guardiola's big guns combined to open the scoring in the third minute.

Yaya Toure's angled pass was headed back across goal by Pablo Zabaleta and any one of three players could have put the ball beyond the goalkeeper Brad Guzan, with Silva applying the finishing touch.

It was a goal destined to further erode the fragile confidence of a Middlesbrough team that struggled to find an immediate response apart from two dreadful tackles, one that earned a caution for Antonio Barragan and another that should have brought the same punishment for Grant Leadbitter.

Congrats to @ManCity who have made it through to the semi-finals of the @EmiratesFACup at #Wembley! See you soon #EmiratesFACup pic.twitter.com/u5ltdF5YqB

Leadbitter, whose inevitable booking eventually came at the end of the half, was employed more impressively when Middlesbrough finally troubled City midway through the half.

The midfielder's corner was met by Rudy Gestede, whose header was parried by goalkeeper Claudio Bravo before Zabaleta completed the clearance on the line.

Another header from Gestede drifted over the bar a minute later in his final contribution before an injury forced him off to be replaced by the former City forward Alvaro Negredo.

Negredo spent the rest of the opening half watching from a distance as his current team came under constant pressure, notably from Leroy Sane, who failed to take advantage of a cross from Raheem Sterling before almost creating a goal at the end of an electrifying run.

Middlesbrough did threaten again when Cristhian Stuani directed a 37th minute header too close to Bravo, but City remained firmly in control of the tie and Toure almost extended their lead with a header shortly before the interval.

Remarkably, the opening stages of the second-half almost brought a replica of City's goal.

It's all over - @ManCity are through to the #EmiratesFACup semi-finals!

This time, Kevin de Bruyne redirected identical Toure's pass across the goal where Silva was waiting again, but this time he wastefully drove his shot over the bar.

City appeared in the mood to finish off Middlesbrough as Guzan was forced to make four fine saves in the space of 10 minutes, twice from Sane and also from Silva and Aguero, who finally found a way past the keeper in the 67th minute when he turned in Sane's excellent cross for the second goal.

The remaining quarter of the match was all about Guzan as he saved superbly from Silva and Aguero, while Sterling had a goal disallowed for offside.

When Middlesbrough did create a rare chance for Fabio, it was cleared off the line by John Stones.

Comments
Topics mentioned in this article
Manchester City Middlesbrough Football
Get the latest Cricket news, check out the India cricket schedule, Cricket live score . Like us on Facebook or follow us on Twitter for more sports updates. You can also download the NDTV Cricket app for Android or iOS.