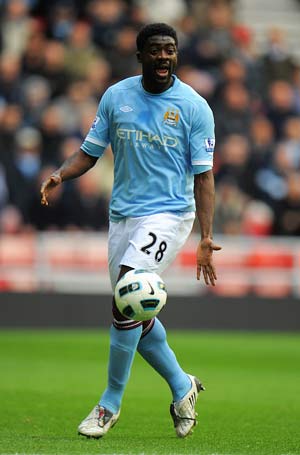 A statement on City's official website read: "Manchester City confirm that the FA has informed Kolo Toure that an 'A-sample' provided by him has tested positive for a specified substance.

"As result of this, he has been suspended from participating in all first team and non-first team matches pending the outcome of the legal process.

"There will be no further comment from the football club at this stage."

It is understood that Toure was not included in City's squad for Wednesday's FA Cup win against Aston Villa because the club were aware of the situation.

The failed test automatically triggered the suspension, with City left with no option but to exclude him from their plans until the conclusion of proceedings.

He was City's captain before Carlos Tevez and has 85 international caps to his name.

The 28-year-old tested positive for the banned stimulant methylhexaneamine at the end of January and missed five matches.

Mensing maintained he was unaware he had ingested the substance while using a dietary supplement - an explanation which was accepted by UK Anti-Doping.

Comments
Topics mentioned in this article
Football Kolo Toure Didier Drogba Manchester City Inter Milan Steven Gerrard Birmingham City Everton Liverpool Chelsea Arsenal
Get the latest updates on ICC T20 Worldcup 2022 and CWG 2022 check out the Schedule, Live Score and Medals Tally. Like us on Facebook or follow us on Twitter for more sports updates. You can also download the NDTV Cricket app for Android or iOS.