Former Spanish striker Daniel Guiza has signed a contract with wealthy Malaysian state club Johor, an official said on Tuesday, in one of the country's biggest transfer deals. 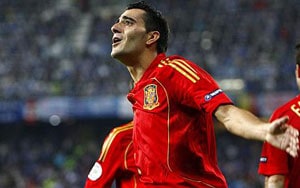 Former Spanish striker Daniel Guiza has signed a contract with wealthy Malaysian state club Johor, an official said on Tuesday, in one of the country's biggest transfer deals.

Johor Football Association secretary Suhairi Hashim told AFP that the 32-year-old had signed a one-year contract. He declined to say how much Guiza cost but added that his market value was two million pounds ($3.2 million).

"We have a massive budget for the team this year to develop football in Johor. For sure, it is one of the biggest soccer transfer deals in the country," Suhairi said.

He said Guiza had undergone medical tests and would join the team for training after Christmas.

Guiza was a top scorer in La Liga for Real Mallorca four years ago before going on to help Spain win Euro 2008. The striker, who has scored six goals in 21 internationals, previously played for Spain's Getafe.

Johor, which last won the Malaysia Cup in 1991, have embarked on a buying spree as they plan an ambitious return to their glory days.

Suhairi said at least eight national team players would be joining his club.

"We want to win every tournament including the Malaysia Cup and the Super League. It is possible with the team we are going to have," he said.

Suhairi said Johor must register their squad for the 2013 Malaysia Super League season by December 13.