Despite bowing out of the Champions League, Manchester United F.C. manager Louis Van Gaal believes that his side has done well. 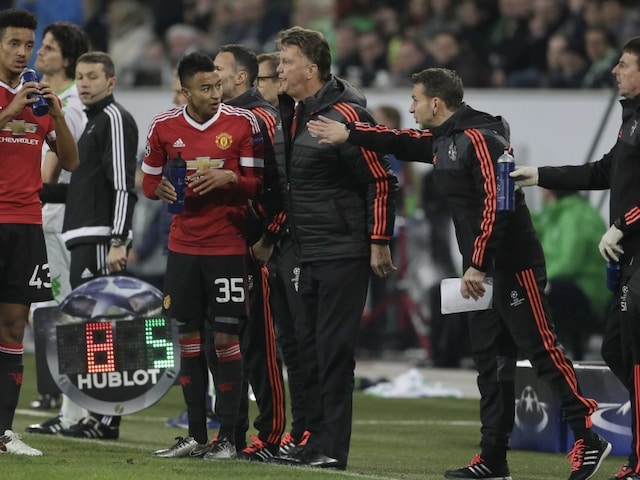 United crashed out with a 3-2 defeat at Wolfsburg, who made club history by reaching the knock-out stages as Group B winners.

The Red Devils suffered a repeat of their 2011/12 European campaign when defeat in their final group game at FC Basel also denied them a place in the last 16. (Louis van Gaal Worried by Manchester United's Attacking Woes)

The defeat puts Van Gaal under pressure with his side now winless in their last four games, but he says pundits who claim United are not improving under his stewardship are incorrect.

"I can't defend myself, because we are out of the Champions League and every word I say will be wrong," he said with United fourth in the Premier League table.

"But when you see the facts, we qualified for Europe last season and we are in a good position in the league.

"The facts say we are better than last year.

"I can only give facts, but of course I am disappointed that we are out of the Champions League."

Anthony Martial's early strike for the Red Devils was cancelled out by first-half goals from Brazil's Naldo and Portugal's Vieirinha.

"It was a crazy match," said Van Gaal.

"We twice gave away goals within two minutes after we had scored, that was difficult to understand.

"I am happy that we scored, but I am not happy why we defended so poorly and it's something I have to analyse.

"I've said in advance this was a tight group and you see it in the results we had.

"Our competitors showed it's not always United who finish first or second."

Van Gaal was left fuming after Jesse Lingard curled home a cross from outside the area, but the linesman spotted Mata was offside and chalked off the goal, which would have made it 2-2 at the break.

"We weren't very lucky today with the decisions from the referee," said Van Gaal.

"When the group is tight, those type of decisions can decide whether you go through or not.

"It's now a matter of time before we can show our qualities in the Champions League again, but we have to wait until next year now.

"We have enough to fight for in the Premier League."

The United boss also repeated his criticism of German captain Bastian Schweinsteiger, who Van Gaal says has not repeated his impressive Bayern Munich form in the United shirt.

Schweinsteiger was taken off with twenty minutes to go in Wolfsburg.

"I took him off and I don't take players off for nothing, but we are all human beings and so is Bastian Schweinsteiger," said Van Gaal.

"He wants to play at the highest level, especially in Germany, to show his qualities, but I can't say he was the Bastian Schweinsteiger I saw during my Bayern Munich days."

The result was an ideal tonic for Wolfsburg after suffering their first home defeat in 29 home games last Saturday when they lost 2-1 against Borussia Dortmund in the German league.

Victory over United sees Wolfsburg qualify for the Champions League's knock-out phase for first time in the club's history following their 2009/10 campaign when they bowed out in the group stages.

"It's a special moment for us," said goal-scorer Naldo, who picked up a yellow card and is suspended for the first-leg of the last 16 clash.

"The team put in a great performance against a super team like Manchester.

"It's a pity that I'm suspended for the next game, but tonight we'll celebrate."

Comments
Topics mentioned in this article
Manchester United VfL Wolfsburg Juan Mata Football
Get the latest Cricket news, check out the India cricket schedule, Cricket live score . Like us on Facebook or follow us on Twitter for more sports updates. You can also download the NDTV Cricket app for Android or iOS.