Long ruled out of Ireland clash

Republic of Ireland striker Shane Long has been ruled out of Friday's crucial Euro 2012 qualifier against Slovakia in Dublin after suffering a calf strain in training. 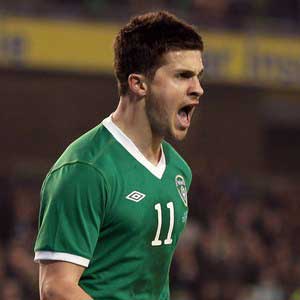 Republic of Ireland striker Shane Long has been ruled out of Friday's crucial Euro 2012 qualifier against Slovakia in Dublin after suffering a calf strain in training.

Ireland manager Giovanni Trapattoni confirmed on Thursday that Long would start at the Aviva Stadium after impressing the Italian with goals against Manchester United and Chelsea in his first two matches for West Brom following a £7 million ($11.3 million) transfer from Reading.

But just 24 hours later, Trapattoni has been forced to change his plans as a result of Long's late withdrawal, and Wolves forward Kevin Doyle will now partner Robbie Keane up front in the Group B clash.

Trapattoni had revealed during his pre-match press conference that part of the reason for selecting Long was the knee injury Doyle suffered on international duty towards the end of last season.

Now he has to gamble on Doyle's fitness against the Slovakians, although Long will remain with the squad in the hope he recovers in time to play some part in Tuesday's clash against Russia in Moscow.

The West Brom star's absence is a second injury blow for Trapattoni, who ruled long-serving full-back Kevin Kilbane out of both games because of a back strain.

Ireland are currently top of Group B ahead of Russia and Slovakia on goal difference.

Comments
Topics mentioned in this article
Football Shane Long Republic of Ireland Czech Republic Ireland Cricket Team
Get the latest updates on India vs Australia and check out  Schedule, Results and Live Score. Like us on Facebook or follow us on Twitter for more sports updates. You can also download the NDTV Cricket app for Android or iOS.