Jurgen Klopp's men host Crystal Palace in the first Premier League game at Anfield for 110 days. A 0-0 draw at Everton in their first match for three months on Sunday means the champagne will remain on ice even if Liverpool return to winning ways. 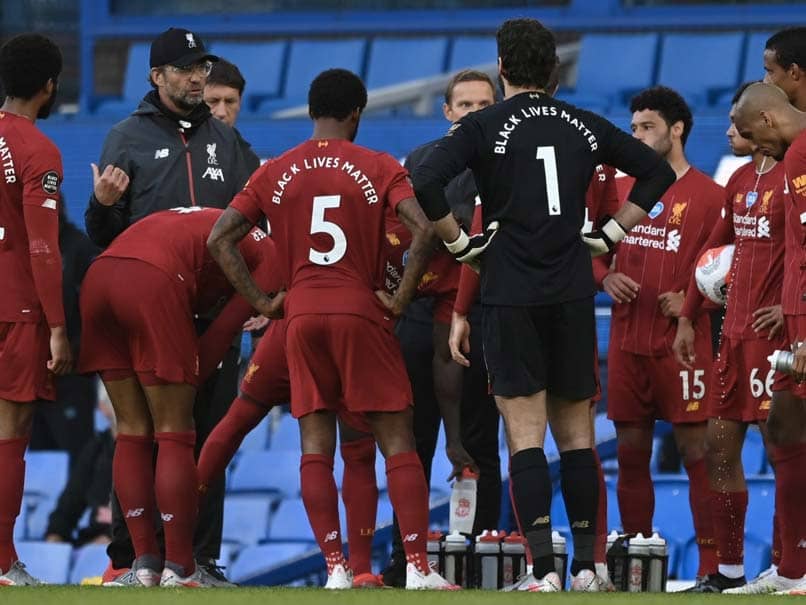 Liverpool are hopeful of having Mohamed Salah and Andy Robertson back fit.© AFP

Liverpool's 30-year wait to win the English title could come to an end this week, but the Reds must rely on Manchester City dropping points at Chelsea. Jurgen Klopp's men host Crystal Palace in the first Premier League game at Anfield for 110 days. A 0-0 draw at Everton in their first match for three months on Sunday means the champagne will remain on ice even if Liverpool return to winning ways. However, victory for Klopp's side will leave City needing to win at Stamford Bridge 24 hours later to deny Liverpool the title. Palace were the last team visiting team to win a league match at Anfield over three years ago. The Eagles impressed in their comeback with a 2-0 win at Bournemouth on Saturday to close to within four points of the European places and Klopp was impressed with what he saw.

"I saw Crystal Palace and they look like a proper-oiled machine," said the German.

"They have four times in a row now a clean sheet, so it will be a tough job 100 per cent, I know that. But that is how the Premier League is always, so no problem with that."

Liverpool are hopeful of having Mohamed Salah and Andy Robertson back fit after both were badly missed in the Merseyside derby.

City's strength in depth was on show as Pep Guardiola was able to make eight changes for Monday's 5-0 thrashing of Burnley.

Kevin De Bruyne and Raheem Sterling are among those expected to come back into the side for the stiffer test of Chelsea, who will be looking to cement their place in the top four.

Frank Lampard's men came from behind to beat Aston Villa 2-1 on Sunday to open up a five-point lead over Manchester United and Wolves.

"Now we have three points when some teams have lost points around us," said Lampard.

"We played well in patches but when they put us under pressure slightly, I thought we gave it away too easily - things we will definitely have to clean up on in the future games coming up."

Depending on the outcome of City's appeal against a two-season ban from European competition, fifth place could be good enough to qualify for next season's Champions League.

United are in pole position to take advantage of their local rivals' punishment and made an impressive return despite being held to a 1-1 draw at Tottenham on Friday.

Paul Pogba won the penalty, converted by Bruno Fernandes, for United's equaliser on his first appearance since December 26 as a substitute.

Ole Gunnar Solskjaer is expected to pair the two star midfielders together from the start for the first time against Sheffield United on Wednesday.

The Blades have taken just one point from their opening two games of the restart, but can still move above the Red Devils with victory at Old Trafford.

Wolves picked up where they left off by beating West Ham 2-0 to move into the top six and will be confident of another victory when they host Bournemouth at Molineux.

Liverpool Football
Get the latest updates on India vs Australia Series, check out the India vs Australia Schedule for 2020-21 and Ind vs Aus live score . Like us on Facebook or follow us on Twitter for more sports updates. You can also download the NDTV Cricket app for Android or iOS.