Liverpool Cruise, Chelsea Made to Work Hard in League Cup

Daniel Sturridge was the star for Liverpool, scoring two goals against Burton Albion while Michy Batshuayi also scored a brace for Chelsea against Bristol Rovers in the League Cup 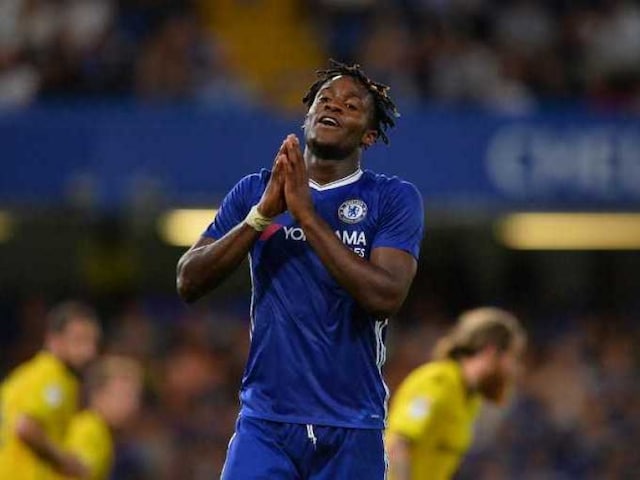 Michy Batshuayi marked his full Chelsea debut with a brace vs Bristol Rovers in the League Cup.© AFP

Daniel Sturridge scored twice as Liverpool strolled into the League Cup third round with a 5-0 win at Burton Albion on Tuesday, while Chelsea edged third-tier Bristol Rovers 3-2.

Michy Batshuayi marked his full Chelsea debut with a brace against Bristol Rovers, while Victor Moses was also on target as manager Antonio Conte enjoyed a third straight competitive win.

But Watford and West Bromwich Albion were both taken to extra time by third-tier opposition, the former drawing 1-1 at home to Gillingham, the latter held 2-2 at Northampton Town.

Mane teed up Origi to break the deadlock with a clever back-heel in the 15th minute before Nathaniel Clyne crossed for Firmino to head in the visitors' second goal.

A Tom Naylor own goal just after the hour made it 3-0 and Sturridge came off the bench to complete the rout with a late brace, tapping in James Milner's cross and slamming home from Mane's pass.

At Stamford Bridge, Batshuayi put Chelsea ahead in the 29th minute by sweeping in Nemanja Matic's cross and two minutes later Pedro Rodriguez set up Moses for a tap-in.

Batshuayi claimed a second from Ruben Loftus-Cheek's cross, but Bristol Rovers scored either side through Peter Hartley and Ellis Harrison to keep Conte's men on their toes until the final whistle.

Comments
Topics mentioned in this article
Liverpool Chelsea Daniel Sturridge Michy Batshuayi Football
Get the latest Cricket news, check out the India cricket schedule, Cricket live score . Like us on Facebook or follow us on Twitter for more sports updates. You can also download the NDTV Cricket app for Android or iOS.