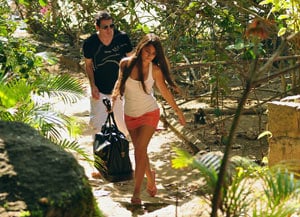 Messi and his girlfriend Antonella Rocuzzo named the boy Thiago.

"Today I am the happiest man in the world, my son was born and thanks to God for this gift!" Messi wrote on Facebook. "Thanks to my family for the support! A hug to everyone."

Barcelona excused the 25-year-old Argentina forward from training Friday morning to attend his son's birth at a hospital in Barcelona.

The club announced the birth on its website after it was originally reported by Spanish and Argentina media outlets and confirmed by Messi.

In a recent interview with Spanish newspaper El Pais, Messi said he was looking forward to becoming a father.

"I'm prepared for Thiago's arrival, it is very exciting," said Messi. "It makes you think of things in a different way. You can no longer just think about yourself, you think about him, and how you hope he doesn't have any problems."

"In principle he is going to be at the game," assured Vilanova. "We gave him permission to miss training, I think that is normal on such an important day, but if everything is OK then he will be here to play."

"I don't think the question will make him lose concentration, but we will have to see. He always plays very well," said Vilanova.

Vilanova, who spent part of his playing career with Celta, admits he still feels affection for the Galician city and for the club.

"I have good memories, because they treated me very well there," he said. "My daughter was just one year old at the time and I have happy memories, Maybe I would have liked to have played more, but I did my best at the time," commented Vilanova, before discussing the current Celta side, which has lost all of its away games to date.

"They try and play attractive football, they keep the ball and have fast players in attack, so we will have to keep up the pace," he said, praising Celta coach Paco Herrera for using such an open style in Celta's return to the top flight after five years in the second division.

"Everyone sets their sides out the way they have to do so, I would rather see a team come to Barcelona to try and play football and I think Celta will do that, as it is what we have seen when we have watched them. I think it makes for a better game."

The Barca coach confirmed that central defender Gerard Pique was on the verge of full fitness after suffering an ankle injury which has kept him out of action for six weeks. He highlighted Pique's importance in defending set pieces.

The birth of his child comes at the peak of Messi's prodigious career so far. After breaking a number of individual scoring records over the past season, Messi is two goals shy of matching Brazil great Pele's milestone of 75 goals for club and country in a calendar year, set in 1958. He is also a leading candidate to win what would be his fourth Ballon D'Or.

(With AP and IANS inputs)

Comments
Topics mentioned in this article
Football Barcelona Lionel Messi
Get the latest updates on IPL 2021, IPL Points Table , IPL Schedule 2021 , live score . Like us on Facebook or follow us on Twitter for more sports updates. You can also download the NDTV Cricket app for Android or iOS.