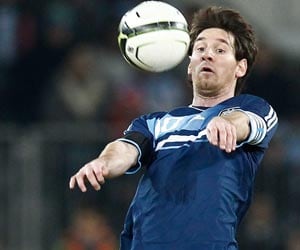 Messi struck with a delightful shot in the 20th minute, a typically mischievous chip in the 88th and a stoppage-time penalty to fully live up to his billing as the three-time World Player of the Year.

"It's a blessing to have him in the team," Argentina coach Alejandro Sabella said, dismissing suggestions that Messi does not reproduce his FC Barcelona form when on national duty.

Switzerland coach Ottmar Hitzfeld had conflicting emotions about a match that slipped away only in the closing minutes.

"I'm disappointed with the result," Hitzfeld said, adding, that "it's always a huge pleasure to see Messi. Except if you're the coach of the opposing team."

Shaqiri helped meet some of the weighty expectations Switzerland has for him, as the 20-year-old leveled in the 49th with his own sweeping shot.

Messi and FC Basel forward Shaqiri have drawn some comparisons as both are quick, technical and left-footed, and they could yet meet again this season, with their clubs in the Champions League.

Still, Messi's first hat trick for Argentina, lifting his goals tally to 22 in 68 games, showed Shaqiri how high the international bar is set.

"It's very difficult to say how good he is," Switzerland defender Philippe Senderos said of Messi. "You know that every time he touches the ball, something special is going to happen. Shaqiri could become a very good player. I think he's a great talent and we're very lucky to have a player like that."

The Swiss squad and media debated before the match who would claim Messi's shirt, and their respect for him surely increased after his first-half display.

Often surrounded by defenders, Messi's passes exposed gaps elsewhere, and only a misunderstanding between Sergio Aguero and Maxi Rodriguez prevented either from exploiting space in the penalty area.

In the 18th, Jose Sosa took Messi's pass in his stride but Senderos stretched to block the shot.

Messi struck two minutes later when he ran at the Swiss defense and finished off a return pass from Aguero, leaving goalkeeper Diego Benaglio helpless.

While Messi dominated through the middle, Shaqiri struggled to threaten from the right flank. When Shaqiri broke once from the center circle, a posse of four blue shirts pursued him wide.

Messi delighted again in the 31st, linking intricately with Aguero before drifting left for a shot that was cleared for a corner.

Swiss left back Ricardo Rodriquez lifted the home fans in the 38th by rifling a long-range shot that went past Romero's left-hand post.

Shaqiri finally got behind the defense just before the break, and his cross was flicked up by Admir Mehmedi for Xhaka to volley a dipping shot that cleared the bar.

Hitfzeld switched to a more direct style for the second half, sending substitute Eren Derdiyok to replace Fabian Frei in a more advanced role.

Derdiyok inadvertently created the equalizer four minutes later. His mis-kick near the penalty spot allowing a cross from the left to reach Shaqiri, who beat Romero with a rising shot.

Argentina protested to German referee Florian Meyer that, moments earlier, Aguero had been brought down by the last defender Francois Affolter, though the tangle appeared accidental.

Messi and Aguero broke together in the 57th, but the Argentina star was muscled out of his shot by Senderos and Affolter.

Derdiyok was whistled by his home fans when he blazed a free kick high, soon after scuffing a shot from Lichtsteiner's cross.

Aguero went close with back-to-back chances in the 75th minute. The Manchester City forward forcing substitute 'keeper Marco Woelfli to tip over his shot, then met the resulting corner with a glancing header just over the crossbar.

Woelfli saved well from substitutes Fernando Gago and Eduardo Salvio as Argentina searched for a winner, then Derdiyok was injured when firing a shot just wide.

Messi left his indelible mark late on. He punished Affolter's mistake to run through, tease Woelfli out of position, then chip a shot which bounced down off the crossbar and over the line.

Affolter was at fault again in stoppage time, tripping Gonzalo Higuain in the area. Messi placed his penalty to Woelfli's right as the 'keeper dived left.

Comments
Topics mentioned in this article
Football Xherdan Shaqiri Lionel Messi Argentina Switzerland
Get the latest Cricket news, check out the India cricket schedule, Cricket live score . Like us on Facebook or follow us on Twitter for more sports updates. You can also download the NDTV Cricket app for Android or iOS.