Champions League: Lionel Messi limps off as Barcelona held by PSG to a 2-2 draw

While Barcelona maintain the upper hand in the UEFA Champions League quarterfinal tie thanks to their two away goals, it was not a good night for the Spanish league leaders, who lost Lionel Messi to a hamstring injury at the half-time interval. 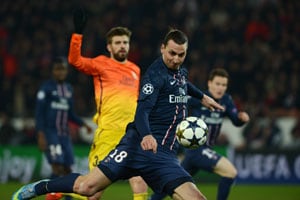 Blaise Matuidi struck with the last kick of the game to earn Paris Saint-Germain a 2-2 draw with Barcelona in the Champions League quarter-final first leg at the Parc des Princes on Tuesday.

Matuidi's shot sneaked through the grasp of Barcelona goalkeeper Victor Valdes and across the line to keep PSG's hopes of winning the tie alive ahead of next week's return at the Camp Nou.

Barcelona thought they had won the game when Xavi Hernandez netted an 89th-minute penalty after Lionel Messi and Zlatan Ibrahimovic had earlier exchanged blows in a pulsating contest in the French capital.

And, while they maintain the upper hand thanks to their two away goals, this was not a good night for the Spanish league leaders, who lost Messi to a hamstring injury, the extent of which will be revealed when he undergoes tests on Wednesday, while Javier Mascherano also went off injured.

"I think it was a typical quarter-final and a good result but we deserved better," said Barcelona assistant coach Jordi Roura.

"And it comes at a price because we have lost Messi as well as Mascherano, who will be out for four to six weeks."

All the talk before the game had centred around the surprise decision by PSG coach Carlo Ancelotti to hand veteran Englishman David Beckham a starting berth in the centre of midfield in place of young Italian Marco Verratti.

Beckham has a wealth of experience of playing at this level, with opposition captain Xavi -- making his 150th appearance -- the only player on the field to have played in more European games.

However, it was a bold move by Ancelotti to put a player who will turn 38 next month in the engine room against the team widely considered as the best on the planet.

"I'm pretty much at the same level as I was at AC Milan, it was only three years ago," Beckham told ITV television after the game.

"I'm enjoying being part of these nights again, they don't get better than this."

On PSG's prospects of qualifying for the semi-finals he added: "Our chances are better than they were at 2-1 - it's going to be difficult but no reason not to go there and get a result."

PSG started well and came desperately close to taking the lead inside five minutes when Ezequiel Lavezzi saw a shot from inside the area take a touch off Sergio Busquets and hit the post.

Valdes then had to turn a Javier Pastore effort around the post and save well from a Ibrahimovic free-kick.

Barcelona were unsettled, but slowly managed to subdue the French league leaders' before taking the lead in the 38th minute when a first-time Dani Alves pass with the outside of the right boot dropped straight into the path of Messi.

The Argentine's finish, volleyed into the far corner, was as emphatic as Alves' assist was sublime.

It was Messi's eight goal in the Champions League this season, and his 59th altogether in the competition.

The world player of the year almost added to it before the interval, curling a shot inches over the bar as the home side desperately tried to regroup.

Fortunately for them, though, Messi was injured and did not reappear after the restart, as Cesc Fabregas took his place.

They still had chances to put the tie to bed, with Alves firing narrowly wide from a 25-yard free-kick midway through the second half after Beckham had been booked for bringing down Sanchez.

By that point, the pace of the game had caught up with the former Real Madrid man, and Verratti took his place.

But PSG remained a threat at set-pieces, and it was from a dead-ball delivery that they drew level 11 minutes from time.

Captain Thiago Silva rose highest inside the box to head a free-kick off the inside of Valdes' right-hand post, and Ibrahimovic reacted quickest to prod the ball over the line.

The home fans' joy was short-lived though, with Barcelona winning a penalty when 'keeper Salvatore Sirigu brought down Sanchez.

Xavi converted from 12 yards, only for Matuidi to make it 2-2 right at the death.

Comments
Topics mentioned in this article
Football Bayern Munchen Arsenal Barcelona AC Milan Paris SG Uruguay Argentina Lionel Messi Xavi Zlatan Ibrahimovic Javier Mascherano Cesc Fabregas Blaise Matuidi Javier Pastore
Get the latest updates on India vs Australia Series, check out the India vs Australia Schedule for 2020-21 and Ind vs Aus live score . Like us on Facebook or follow us on Twitter for more sports updates. You can also download the NDTV Cricket app for Android or iOS.