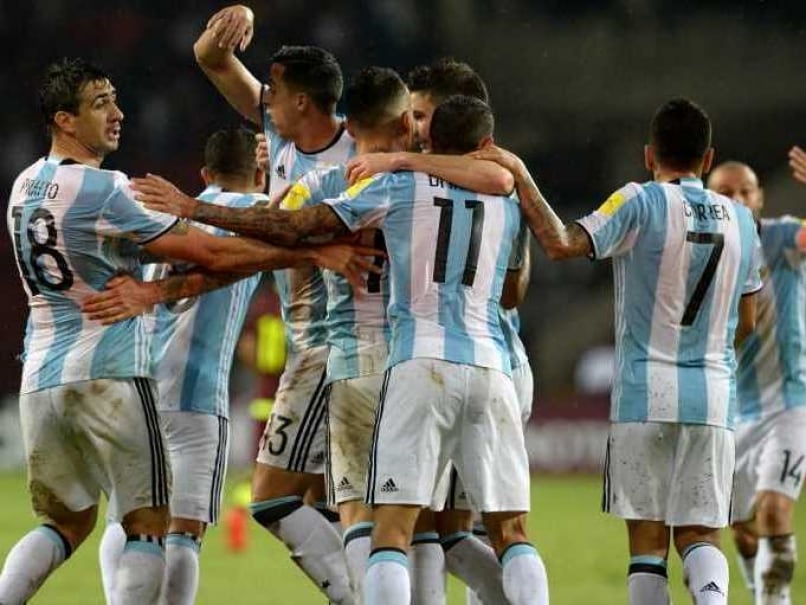 Argentine players celebrate after scoring against Venezuela in the 2018 World Cup qualifier.© AFP

Nicolas Otamendi scored a late equaliser as Lionel Messi-less Argentina fought back from 0-2 down to snatch a 2-2 draw against Venezuela in South America's 2018 World Cup qualifying tournament on Tuesday.

Manchester City defender Otamendi popped up in the 83rd minute to steer home a whipped in corner by Angel Di Maria to complete a dramatic turnaround by the Argentines at a rainswept Estadio Metropolitano in Merida.

Otamendi's leveler came after Lucas Pratto had pulled a goal back after goals from Juanpi Anor and Josef Martinez put Venezuela 2-0 up.

Argentina, missing their injured captain Messi, as well as Sergio Aguero, Gonzalo Higuain and Paulo Dybala, were always struggling to reproduce the sort of incisive form that accounted for Uruguay in last week's win.

Venezuela took the lead after 35 minutes when Malaga livewire Juanpi skipped clear of his marker outside the Argentina area and lashed a shot into the top corner.

The Vinotinto held onto the advantage to halftime and then doubled their lead on 53 minutes with a goal that owed everything to the physicality of Salomon Rondon.

The West Bromwich Albion striker outmuscled Otamendi to win an aerial challenge, turned and sprinted in on goal.

Rondon then unselfishly laid off to Torino forward Martinez, who took his time before wrong-footing Sergio Romero with a cool finish.

Argentina pulled a goal back through Pratto in the 58th minute, the Atletico Mineiro forward bundling home from close range to give the visitors hope.

Venezuela -- with only one point from their first seven games -- looked like they were on course for their first win of the campaign as Argentina struggled to penetrate their defense.

But with the clock winding down, Di Maria's wicked corner was turned in by Otamendi and Argentina had secured a share of the points.

Comments
Topics mentioned in this article
Argentina Venezuela Lionel Messi Nicolas Otamendi Josef Martinez Football
Get the latest updates on IPL Auction 2023 and check out  IPL 2023 and Live Cricket Score. Like us on Facebook or follow us on Twitter for more sports updates. You can also download the NDTV Cricket app for Android or iOS.