Lionel Messi scored a brace as Barcelona defeated Eibar 4-0 to open up an 11-point lead at the top. 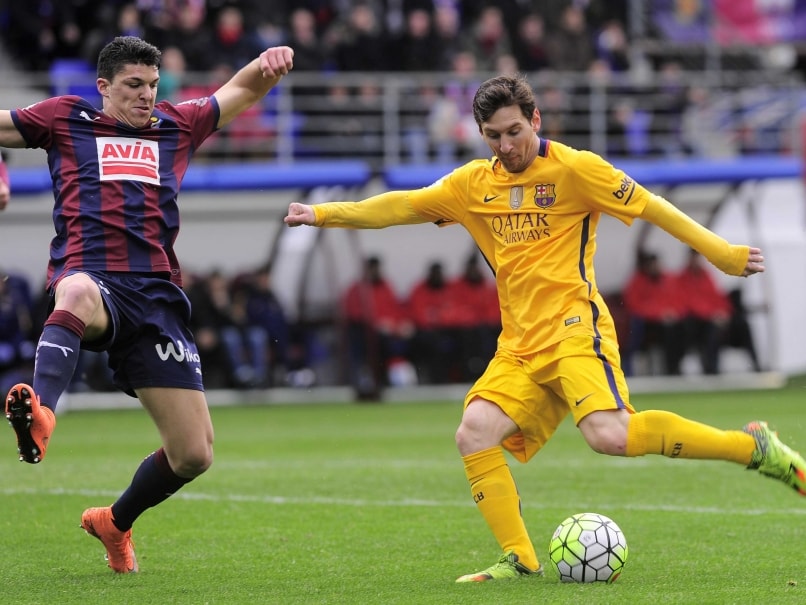 A Lionel Messi-inspired Barcelona tightened their grip on the La Liga title race with a comprehensive 4-0 win at Eibar on Sunday top open up an 11-point lead at the top. (Read more football stories here)

Messi doubled his tally from the penalty spot before Suarez lashed home the fourth six minutes from time.

Atletico Madrid can close the gap at the top to eight points when they visit Gary Neville's Valencia later on Sunday.

Real Madrid remain 12 points adrift of Barca in third despite Cristiano Ronaldo's four-goal show in a 7-1 demolition of Celta Vigo on Saturday.

The European champions were without the suspended Neymar, who made the most of his free weekend to return to his native Brazil.

However, El Haddadi made the most of his rare chance to start with a simple finish at the back post eight minutes in after Messi's brilliant pass had played in Suarez behind the Eibar defence.

Suarez was surpassed by Ronaldo in the fight to be La Liga's top scorer and the Uruguayan look determined to hit back early on, but fluffed his lines with just Abel Riesgo to beat two minutes later.

El Haddadi should have teed up Suarez for a tap-in from another Messi through ball midway through the half, but the youngster overhit his pass and the ball slipped just wide.

Eibar then enjoyed a concerted period of pressure and were desperately unlucky not to level when Borja Baston's cross hit Sergio Busquets and flew inches past the far post.

Yet, just when Eibar looked the most likely to score, Messi killed the game as a contest as he intercepted the ball in midfield and drove towards the Eibar goal before firing into the far corner for his 20th league goal of the season.

The second-half was far shorter on goalmouth action, but there was time for Messi to put Barca's recent troubles from the penalty spot behind him when Ivan Ramis blocked the Argentine's cross with his hand.

Messi took responsibility after Suarez had missed from the spot against Rayo Vallecano in midweek and coolly dispatched the penalty for his 35th goal of the season.

And Suarez finally got the goal he craved to move back to within one of Ronaldo in the scoring charts with a brilliant nutmeg of Capa before smashing the ball into the far corner.

That goal also took Suarez, Messi and Neymar's combined tally for the season to 100.

Comments
Topics mentioned in this article
Lionel Messi Barcelona Football
Get the latest updates on ICC T20 Worldcup 2022 and CWG 2022 check out the Schedule, Live Score and Medals Tally. Like us on Facebook or follow us on Twitter for more sports updates. You can also download the NDTV Cricket app for Android or iOS.