Lionel Messi was harshly sent off as Argentina secured third place with a 2-1 victory over Chile on Saturday. 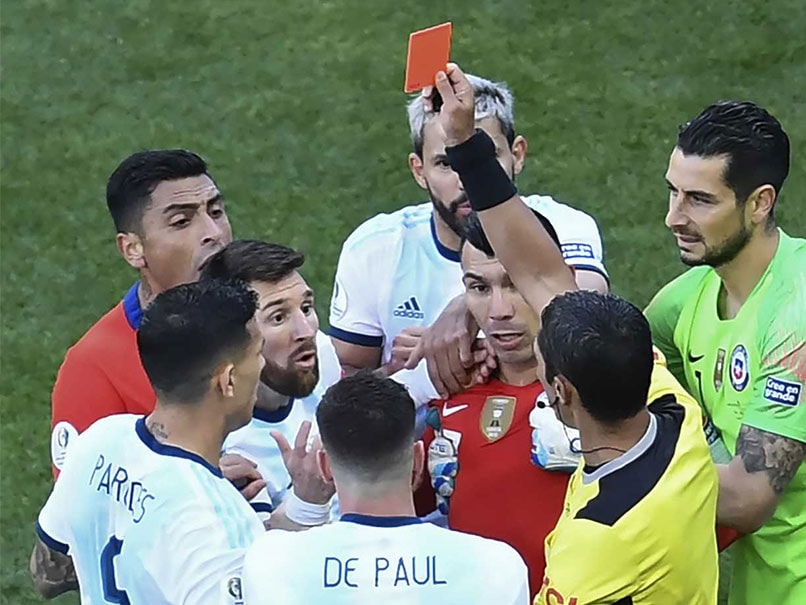 Lionel Messi and Gary Medel were given their marching orders eight minutes from half-time.© AFP

Lionel Messi hit out at "corruption and the referees" at the Copa America after he was harshly sent off as Argentina secured third place with a 2-1 victory over Chile on Saturday. In a niggly and fractious match, five-time Ballon d'Or winner Messi and Chile captain Gary Medel were given their marching orders eight minutes from half-time after tangling on the goalline. Television replays of the incident suggested Messi had done little wrong. "Corruption and the referees are preventing people from enjoying the football and they're ruining it a bit," said the global star.

Messi had already been angered by the refereeing during Argentina's 2-0 semi-final loss against Brazil, claiming the hosts were getting preferential treatment from South American football's governing body CONMEBOL.

Saturday's match will be most remembered for the double sending-off and the melee it sparked.

In what seemed an innocuous clash, a frustrated Messi shoved Medel in the back as the center-back shepherded the ball out of play.

A furious Medel responded by chest-bumping Messi twice in an incident that probably merited no more than a single yellow card for the Chilean.

"Medel always goes to the limit, but it wasn't a red card for either of us. He (the referee) could have consulted VAR," said Messi.

VAR was the issue in Argentina's defeat by Brazil as Messi and his team-mates twice felt they should have had a penalty, only for Ecuadoran referee Roddy Zambrano to not only wave away their claims but refuse to consult the video assistance.

"Brazil were the hosts and they're managing a lot in CONMEBOL these days, which makes it complicated" for everyone else, Messi had said, while criticizing the referee.

That was something he felt he paid for in this match.

"I think the dismissal was over what I said. My words had repercussions, but you must always be sincere," he said after the victory over Chile.

"Before the match started he (the referee) said he liked to talk and hoped that we'd have a calm match, but at the first incident he sent me off."

Medel could have few arguments as he reacted even more angrily after seeing red while players from both sides squared up to each other and the referee, who lost complete control of the situation.

It took fully five minutes to calm the situation and get Messi, who remained measured throughout, and Medel to leave the field.

- 'Weighted towards Brazil' -
Messi, though, took aim at hosts and arch rivals Brazil.

"I think there's no doubt that Brazil are going to be champions. The Copa is weighted towards Brazil and hopefully VAR and the referees will have nothing to look at in the final and Peru can compete, because they have the team to do so, although it looks tough to me," he said.

In Sao Paulo, Sergio Aguero and Paulo Dybala scored the first half goals that ensured victory for Argentina.

Messi had created the opening goal with a quickly-taken free-kick on 12 minutes, picking out Aguero's clever diagonal run before the forward rounded goalkeeper Gabriel Arias and passed the ball nonchalantly into the empty goal.

Ten minutes later, Dybala doubled the lead with a cool, dinked finish past the advancing Arias after taking a sumptuous Giovani Lo Celso through ball in his stride.

By that time, Chile had seen influential Manchester United forward Alexis Sanchez limp off with a hamstring injury.

After the dismissals, Chile seemed in danger of losing their heads and Erick Pulgar was lucky to receive only a yellow card for a stamp on Leandro Paredes that looked a far worse offence that either Messi's or Medel's.

Chile were handed a lifeline when Lo Celso was adjudged to have brought down Charles Aranguiz on the edge of the penalty area, with Arturo Vidal slamming home the penalty on 59 minutes.

Aguero came closest to scoring again but his chipped finish hit Arias in the head.