Earlier, Lyon's disastrous week was made even worse as Remi Garde's side followed up their midweek Champions League exit by crashing to a 2-1 defeat away to Evian. 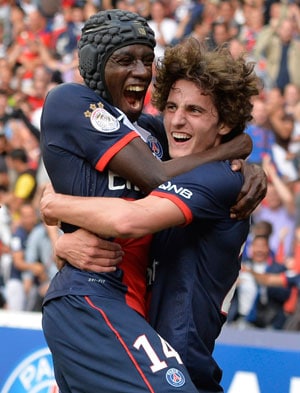 Teenager Adrien Rabiot came off the bench to spur French title-holders Paris Saint-Germain past promoted Guingamp 2-0 on Saturday, as the midfielder netted a decisive injury-time goal at the Parc des Princes.

PSG's stuttering start to the season appeared set to continue as the woodwork twice denied Laurent Blanc's side, but 18-year-old Rabiot struck a minute into stoppage time before Zlatan Ibrahimovic made the points safe.

The win takes PSG to within a point of leaders Marseille, who host Monaco on Sunday.

Last year's top scorer Ibrahimovic, without a goal in his opening three matches, almost opened his account for the season inside two minutes as he struck the base of Mamadou Samassa's post from a free-kick.

Edinson Cavani then saw a glancing header at the near post turned over by Samassa before the frame of the goal again came to Guingamp's rescue as Thiago Silva headed the ensuing corner against the crossbar.

The visitors rarely troubled PSG bar for a deflected Moustapha Diallo effort that drew a routine save out of Salvatore Sirigu, but Guingamp goalkeeper Samassa grew increasingly busier as PSG pressed to break the deadlock.

The Mali international turned away another Cavani header after the interval before holding a low strike from Ezequiel Lavezzi, with Ibrahimovic then shooting wide after combining well with Cavani.

However, Mustapha Yatabare almost stunned the home fans as Guingamp countered against the run of play with PSG indebted to Sirigu, the Italian expertly saving with the striker through on goal.

The visitors seemed set to come away with a commendable point, but they cracked a minute into stoppage time as Samassa could only claw Alex's header into the path of Rabiot, who stabbed home from close range for his first PSG goal.

Ibrahimovic added gloss to the score as he outmuscled Jeremy Sorbon to reach a hopeful ball forward before eluding Samassa and steering into an empty net.

"The first half was laboured. If the free-kick that hit the post had gone in it could have been different. We were going to sleep in the first half, but we didn't concede a goal which is an improvement," said Blanc afterwards.

"And we can also point out the players didn't give up even though there were just a few minutes left (before we scored). They were rewarded for that.

"We expected to suffer at the start of the season. That's proven to be the case but, in terms of points, we're not doing too badly," he added.

Earlier, Lyon's disastrous week was made even worse as Remi Garde's side followed up their midweek Champions League exit by crashing to a 2-1 defeat away to Evian.

Kevin Berigaud struck two first-half goals at the Parc des Sports in Annecy as Lyon slumped to a fourth straight defeat in all competitions.

The Evian striker notched the opener on eight minutes after latching onto Cedric Barbosa's through ball and added to his haul just after the half-hour as he exchanged passes with Danish winger Daniel Wass before slipping the ball under goalkeeper Anthony Lopes.

Lyon, who were already without the injured Clement Grenier and exiled attacking duo Jimmy Briand and Bafetimbi Gomis, were then dealt a further blow as midfielder Yoann Gourcuff limped off just before half-time with a thigh problem.

The visitors did manage to pull a goal back through Jordan Ferri's superb long-range strike early in the second half, but that would prove the lone bright spot for Lyon as Evian secured a deserved first win of the season to move off the foot of the Ligue 1 table.

Comments
Topics mentioned in this article
Football Paris SG Marseille Adrien Rabiot Zlatan Ibrahimovic
Get the latest updates on ICC T20 Worldcup 2022, check out the Schedule and Live Score. Like us on Facebook or follow us on Twitter for more sports updates. You can also download the NDTV Cricket app for Android or iOS.