Jupp Heynckes, one of the names linked to take over at Bayern Munich, on Wednesday delayed contract extension negotiations with Bayer Leverkusen until the international window at the end of the month. 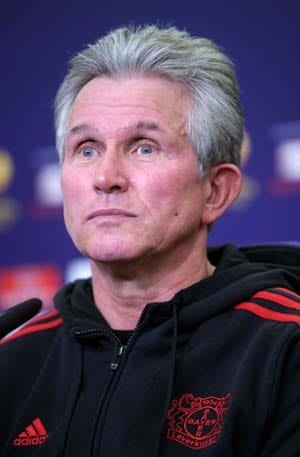 Jupp Heynckes, one of the names linked to take over at Bayern Munich, on Wednesday delayed contract extension negotiations with Bayer Leverkusen until the international window at the end of the month.

With Bayern's current coach Louis van Gaal set to part company with Munich at the end of the season, the 65-year-old Heynckes is one of the coaches tipped to take over the Bavarian giants.

"The club (Leverkusen) knows my position," said Heynckes with his side set to face Villarreal in the round of 16 of the Europa League, first-leg, on Thursday.

"We now have four important games ahead of us, then we will get together and make a decision during the international break."

With Germany set to face Kazakhstan at home on March 26 in a Euro 2012 qualifier and Australia in a friendly three days later, Heynckes will use the break to discuss his future with his Bayer contract set to expire on June 30.

Then he took charge for five games in 2009, in the wake of Jurgen Klinsmann's dismissal, when he steered the team to second in the league.

Having joined Leverkusen in July 2009, Heynckes won the Champions League with Real Madrid in 1998.

Turkey coach Guus Hiddink, ex-Tottenham Hotspur boss Martin Jol and even current Germany coach Joachim Loew have been linked to the Bayern job after the German giants announced Monday they will part company with van Gaal in May.

Comments
Topics mentioned in this article
Football Bayer Leverkusen Shinji Okazaki Borussia Dortmund Bayern Munchen
Get the latest updates on ICC T20 Worldcup 2022 and CWG 2022 check out the Schedule, Live Score and Medals Tally. Like us on Facebook or follow us on Twitter for more sports updates. You can also download the NDTV Cricket app for Android or iOS.